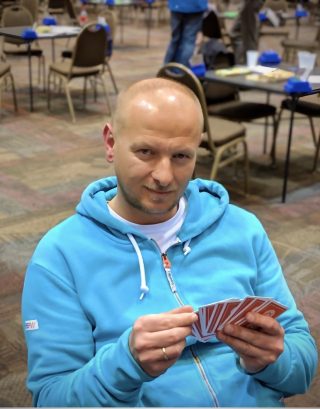 Over the past few days, Neapolitan Club received a message from some players under investigation. They complained about the methods adopted by the EBL Investigastion Committee and considered its approach as a kind of “blackmail”.

Therefore, we contacted Mr Maciej Klis, a lawyer representing some of the players under investigation. We asked him a few questions about what is happening.

Laura Camponeschi: Can you please explain what your clients are experiencing?

Maciej Klis : The things that are happening are really shocking and unbelievable. We have a group of players, officially cooperating only with private businesses like BBO, but I do not think it is true. As you know, one of my clients received messages from Eric Laurant, the EBL Investigation Committee’s Chief. He was using information collated by BBO and – my clients are sure – from the Credentials Advisory Team (CAT). In the emails, Laurant used algorithms created and used by CAT as proof of the allegations. At the same time, Brogeland, one of the members of CAT, rang my clients. All messages were quite surprising, because they included pure blackmail.

Officials from the EBL wrote:

“If players don’t confess (which is their right and their own choice) all information will become public and the bridge community and sponsors / clients will form their own opinion; these opinions can differ from the official verdict of course but any consequences of this are not our responsibility.”

What do you think about the EBL procedures?

It is unbelievable. EBL clearly states that even if players are found not guilty, all allegations will be disclosed. This means a group of individuals is able to have a significant impact on someone’s professional life. Most of the sponsors are very sensitive about public opinion and will never again hire suspected players even if they are later proven innocent. It is very difficult for my clients to respond to the allegations, because they only received a couple of hands, nothing more. They then consulted with independent bridge authorities and no one found even a shadow of proof in these hands.

Are you saying that, in your opinion, EBL is cooperating with CAT?

Yes. The only thing that matters is CAT’s opinion. David Gold in a recent interview said that he did not want to answer questions about CAT’s cooperation with NBOs, but a day later he answered my post on Bridge Winners, saying that there was absolutely no cooperation. Mybe there is no official cooperation beetwen EBL and Cat, but NBOs bypass that and ask members of CAT to be NBO’s expert or just using data of CAT. This shows that he knows that cooperation is not appropriate and likely against the law.

And what are your views about the cooperation between EBL and BBO?

The key issue is using private data, like logins, IP adresses, devices used, etc. All that data came from BBO. Most of my clients never agreed to sharing their data. When they signed up to BBO, BBO was not allowed to gather and share these data. Then BBO changed its privacy rules, but no user was informed. BBO added in a rule, that every user is obliged to regularly check BBO’s website for updates on its policies. It has been a long time since I have seen anything like this!

What’s your view about CAT activities?

Rumours among players spread very quickly. Only CAT members should know the facts, so if people are talking about it, it means someone revealed information. Of course, through this process sometimes cheaters will be found, but on the other hand many innocent players will meet terrible consequences, without formal proceedings, without the right to defend themselves.

What do your clients want to do to defend themselves?

My clients are very determined not only to prove that they are not guilty and always play ethically, but also to identify people and organisations responsible for the witch hunt. This means seeking compensation and a formal apology from BBO, EBL and all others involved. Nobody knows what is going on, all procedures are secret and it is difficult not to think about a hidden agenda, i.e. getting rid of competition. The money in bridge is quite big, but only for a few players, so we cannot underestimate this aspect.