1♣ by Bocchi (North). N-S use the variable 1NT opening: 12-14 love all, 10-13 in favourable zone, 15-17 in zone; the opening 1♣ has to cover the remaining cases, as here 15-17 love. The varying NT was born since long time: it was recommended in the twenties by the self saying ruling bodies, i.e. the Knickerbockers Whist Club of New York (Sidney Lenz), and the Portland Club of London. Their opening suit had to be always fifth, but the balanced 12-15 vulnerable was thought too dangerous for 1NT, so they opened it by the best minor. The Culbertson school, instead, having the more precise four card suit opening – the then called Approach Principle – was only very rarely forced to open by three card minors or by weak 1NT.

Overcall of Furuta (East), double by Madala (South). In December 1930 – January 1931 Culbertson and Lenz had the famous Bridge Battle of the Century; the former prevailed, and the five card suit felt into disuse. Twenty years later, in 1953, it was Alvin Roth who resumed it, but Roth himself soon saw that the 4-4 major fit was often missed because the overcalling, then four years later he devised the “negative double”, after named “sputnik”, to show one major or both.

2♠ by Bocchi. The sputnik double starts from 7-8 points and has not upper limit. In the lower limit it grants four card major (here heart), then Bocchi, having seventeen points, felt committed to game: 4♥ if Madala is minimum; or more, in heart or in other denomination. 2♠, from the partner’s viewpoint, asks for stopper (I suppose; it was alerted, but not explained by BBO commentators). Bocchi instead was giving a strength signal which had had to be explained later. By this cue bid, Bocchi has taken the “captainship” of the auction: it is him who will decide the future. The Captainship Principle was a cornerstone of Paul Stern’s Vienna System, who won the 1937 World Championship with Austria. 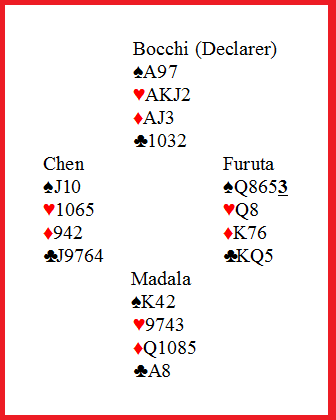 Supposing that the key cards, ♥Q and ♦K, were both offside, as it might be because the overcall, it is still possible make the contract, but there is a matter of timing. Bocchi took the lead and at once played the two heart heads; the queen dropped and, after the diamond finesse, he claimed, the losing spade which vanished on the fourth diamond. It looks easy, but an American champion, in another match, made the heart finesse, instead. East won and insisted with spade; when he again took the lead by ♦K was able to cash another spade.