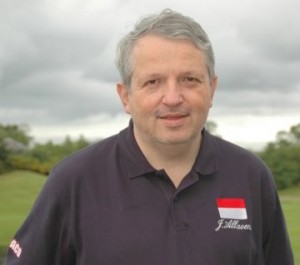 Mr Jean-Charles Allavena, President of the Monaco Bridge Federation, has sent us this message:

One week ago, the Monaco Bridge Fed (FMB) has been contacted by M. Boye Brogeland , with the following message “We have studied a lot of boards of Fantoni – Nunes, the videos proof that signals are exchanged. If the players don’t publish a press release confirming that they cheat, and if the FMB doesn’t withdraw from the Bermuda Bowl, all will be put on Internet, with the devastating effects you imagine”: as if it was possible, in our world today to hide such information when it exists, God himself can’t, so Mr Brogeland…. It’s important to precise that, at this moment, and during several long days, Mr Brogeland didn’t send any board or video to us.

We fully respect the work of the journalists who try to find hidden information, and in this case the work of the whole team who analysed videos and boards and provided convincing material. However it is a strange conception of the world to believe that justice may be done publicly, on Internet, by people who in their large majority dont have the capacity to judge and this on behalf of a small group of people, who have not been elected by anybody in order to play such a role. When Jeff Meckstroth applauses this morning on Bridgewinners, with the words “Boye Brogeland, there’s a  new sheriff in town”. I’m not convinced that it’s a good thing for all of us to come back to the wild law of the Far West and to forget that, in USA too, police leaves the place to justice after having established the facts!!

We exchanged a lot with M. Brogeland during last week, and it’s clear that the reason of his actions is that he doesn’t trust anymore the official bodies (WBF, EBL, ACBL) to have a real action against cheaters and he then is convinced that public communication is the only way to act. I believe that this statement is totally wrong, and facts prove this :

* when a US player, after a lot of years of rumours, said that he had discovered the code of the “Doctors” and decided to ask WBF to investigate, did WBF refuse? NO. Concrete actions have been taken, by a lot of TDs, in order to transform strong feelings into prove, with a last step at Monaco Cavendish 2013, where all has been definitely established. After this justice has been made, on sound basis.

* when some players came to tell me their doubts about the winners of our Cavendish 2012, we took the decision not to invite them anymore, in order to protect the Tournament. M. Brogeland was not among these players who had the courage to come to us and say the things, and at the contrary, some time later he decided to play with them, despite what he knew: ethics were at this moment not as important as business!!

* when ACBL took the hugely severe decision against Mike Passell this summer, who may say that ACBL is an uninterested an sleeping body?

* and as we read it on Bridgewinners, if M. Brogeland team hadn’t lost the quarter final in Chicago, nothing should have happened, players preferring the rules of ‘omertà’ rather than courageous actions… But as soon as the job has been made by the players, IBF first, EBL then, have started their actions and are investigating the case. It may be disappointing for M. Brogeland and his friends, but it seems that they have decided to do it seriously, including the hearing of the players. Sorry for the sheriff, the time when people were hung without trial is over…

As soon as we’ve received the message of M. Brogeland and his illegal threats (he doesnt call them threats, they are supposed to be friendly recommandetions, thanks my friend!!), we’ve told him a certain number of things :

* of course, we’ll not accept any kind of threats, and if he wants to publish or any other action, this is his problem, not ours,

* of course we’ll wait for the “proves” and analysis (and only received the first ones during the night from Friday to Saturday),

* of course, even if evidence may seem real and strong for a lot of people,  we need time to study them and make our own opinion.

And of course, less than one day after the reception of the docs, FMB has officially transferred all to EBL and WBF, asking them to open official investigation (we received this morning the answer of the President of EBL, confirming that he will act). We are conscious of the situation, of the problems that all this causes to bridge and of the necessity to move back to serenity: this means  that, after discussion between FMB, Pierre Zimmermann and the players, until EBL and/or WBF close the case with averdict, Fulvio Fantoni and Claudio Nunes will not take part to any upcoming event inside the Monaco Team.

Despite all what M. Brogeland may say or believe, we’re in a world where legal organizations exist and have to play their role, which is difficult. It’s easy to understand that it’s impossible to have a TD full time behind each table, or to ask that each video of each match is watched: this can only be started after a first level made by the players, and if players remain silent, nothing is possible. It’s easy to accuse official bodies, but players will also have to explain why all these who now say that they were “knowing”, “feeling”, “suspecting” have remain silent during years : all what has appeared this summer could have appeared long time ago. For this reason, we’ve said to M. Brogeland that we could use the upcoming Cavendish in Monaco (where he’s still invited, we dont mix the things) to have a first meeting with a group of top players (some having been involved in all the process), with members of official bodies (President of WBF and EBL, Members of the Boards), with journalists too who have a role to play: this is the constructive way to treat the things, we fully support it, but of course you don’t get through such actions he same level of self-promotion than on Internet…