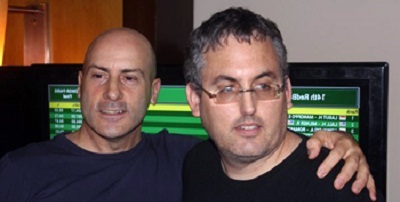 Ehud Friedlander and Inon Liran of Israel won the Open Pairs at the recent World Bridge Series in Sanya, China, in impressive fashion, finishing first or second  in all three phases of the 24-session event and winning the final by an eye-popping 3%. Here’s the translation by Hanan Sher, from the original Hebrew, of Ram Sofer‘s interview with Liran that appeared in the November issue of the Israel Bridge Federation’s monthly bulletin.

Ram Sofer: You were a classical musician, a cellist, for many years. Do you see a connection between music and bridge?

Inon Liran: I certainly see a connection. The two fields are analytical. Studies of the mind’s activity have shown a connection between music and mathematics. Both fields involve similar patterns.

Is there a resemblance between bridge partnership and two musicians making chamber music?

Certainly. The essence of bridge is understanding your partner and his thoughts as expressed in the cards. In chamber music (for two or more musicians) you also have to understand your partner, to be acquainted with their playing style, to anticipate that they will do and adapt yourself on the spot to the character of their playing.

Tell us a little about your partner, Udi Friedlander? (Udi is the common nickname for Friedlander’s first name, Ehud.)

Udi is a professional bridge player. For a long time he had the reputation of being a very talented individualist, a superb dummy player and excellent card reader with great table presence. Over the years Udi developed an approach that was more professional, considerably improving his bidding and coordination in partnership defense. That’s how he reached the highest levels.

Is his style different from that of most Israeli players?

Udi is different from most players of his age, who I trained with in the framework of the youth national teams. We were then more didactic, less creative. We learned bidding very well from David Birman (a long-time Israeli international and main mover behind Israel’s successful development of young players H.S.), and the game was built more on avoiding errors, less on creativity and inspiration. Udi thinks about the game much more instinctively and improvises a lot. In musical terminology, he resembles a jazz player.

And you, as a classical musician, oddly prefer cooperating with that style?

Perhaps surprisingly, the answer is yes. There’s no doubt that my character is more solid, so we compliment each other. To tell the truth, it’s desirable for bridge partners to be slightly different from each other. If they’re both too creative, they “destroy” each other, it’s hard to coordinate and attain good results. The situation where one player is creative and the other is much more solid exists in many top partnerships in Israel and the world.

There’s a lot of talk about partnership “chemistry.” What is it that makes one partnership succeed more than others of players at the same level?

I think that the central factor is understanding partner’s style. Knowing what partner will call with a specific hand is more important than knowing what you’d bid with that hand. In the very best partnerships, each partner knows how to characterize his or her partner and adapt himself or herself to them. Every pair builds its own kind of language that stems from close acquaintance between the two partners.

What about personal relationships between the partners?

Naturally there are bridge partnerships where the two are good friends away from the table, but that’s not necessary for success. I’ve met excellent pairs, European champions, who didn’t have good relations between them. There were even cases where the partners didn’t speak to each other away from the bridge table. Still, during a competition it’s important that there’s mutual support and good relations. Every player has to try hard to maximize his partner’s ability and not deal excessively with mistakes.

Inon, you’ve been known for some years as one of Israel’s top bridge players. But you’ve never accomplished very much by international standards, and here suddenly there’s this championship. How did it happen?

The story begins with the younger generation in Israel, which every time passes the previous generation. Except for the Herbst brothers (Ilan and Ophir), who have carried Israeli bridge on their backs for 30 years, the current Israeli national team, European champions, is made up of the “magnificent four” — Ron Schwartz, Lotan Fisher, Alon Birman and Dror Padon – all young guys who have reached the highest levels, all professionals who have been successful in the world’s most prestigious competitions from a young age. They’ve turned Israel into a world bridge power of the first rank.

Players like me and Udi have the opportunity of competing on a national level against those players on a permanent basis, which raises our level of play. In fact, in addition to members of the national team, there are other Israelis on the highest international level. That’s why, although we are not that well-known in the world, why we are capable of winning titles like the World Pairs Championship.

With all that, the accomplishment is really exceptional. Taking first place by 3%.

The tournament was a breakthrough. We had average results in our previous international experience. In Sanya everything came together – stability, concentration and luck. Bridge is a genuine sport. In a single competition, even a less experienced pair can find itself in first place.

In one interview you said that no pair has won the world pairs championship twice – in your view, was your victory a matter of luck?

This kind of accomplishment in a pairs competition is hard to replicate. There are other tournaments in Israel and the world, and we’ll naturally try to do our best in all of them, but I see this win as a once-in-a-lifetime accomplishment.

I’d like to add that luck has less of an influence in teams competition than it does in pairs. We see pairs that win teams competitions over and over. Garozzo and Belladonna, the Italians, won a long string of European and world championships in teams, and it wasn’t luck. It’s not certain that they would have done so in pairs.

What makes one world-class pair better than another?

First of all practice. Professionals spend a great deal of time on bridge, working with the system and are in good condition because they often play in high-level tournaments. That’s the secret of success. In addition, the best pairs have the mental ability to lift themselves even after bad performances.

How did you prepare for Sanya?

Before the championships, we went through our system systematically, to know it better, and we practiced on the Internet. With all that, I am not a professional and have a day job. So it’s clear that the quantity of our investment didn’t approach that of the world’s top pairs.

Is it possible that you’ll turn pro, as a result of the win?

There’s always a possibility, but it depends on the offers we get and our decisions. All that’s just speculation at the moment. We haven’t yet examined a serious offer for changing careers.

The Israel national team will play in the Bermuda Bowl next year, in India. Is there the possibility that you and Udi will be on it?

Winning the European Championship is an unprecedented accomplishment, and that’s the team that should go to India. If that happens, I believe that there’s a good chance they’ll compete for the top places.