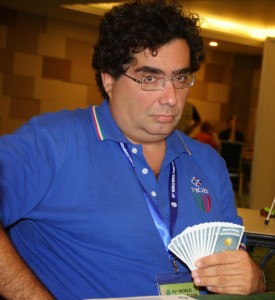 On the 16th of September 2015, the Italian Bridge Federation (FIGB) announced that an investigation on Fulvio Fantoni and Claudio Nunes was going to start and some days ago FIGB asked the prosecutor to establish whether Fantoni and Nunes could be temporarily suspended, in light of the evidence collected so far.

Therefore, I asked Alfredo Versace how he reacted to the accusations which have been broadcast worldwide and to answer those who ask Italy to give back the trophies won in the past.

“It is the first time I talk about it officially because I am sad and sorry “- Alfredo said – “I have been Nunes’ teammate for the first time when I was 17 years old and I played with him and Fulvio one of my first European junior championships.

We then played together in various teams: Angelini, Cayne, the Italian Open, until we parted company in 2010 and Claudio and Fulvio started playing for Monaco.

If the accusations were proven, it would be a real set back for bridge generally speaking and particularly for Italian bridge. It is true that Fantoni and Nunes have not been playing for Italy for five years, but they owe their popularity and career to Italian bridge.

I would like to add that we shared a lot with Fantoni and Nunes we won and lost, we played many finals, which are reported on many books, including, among others, Eric Kokish accurate and appreciated  analysis of Estoril’s final.

At that time, nobody raised doubts, and the bridge community did not have any suspicions. Had there been a problem back then, it would not have escaped the experts’ eyes. Additionally I do not think that Zimmermann or Monaco would have hired someone who was even remotely suspected of cheating.

I thus think that it is not up to me to decide on the matter, there are authorities responsible for this.

My view, shared by Lauria and the other teammates, is clear from my words. Anyway, we wait for the decisions of the official bodies.”
***