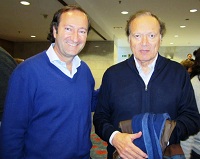 The event was held from the 1st to 3rd of February 2013 at the Catalonia Barcelona Plaza Hotel in Barcelona (Spain).