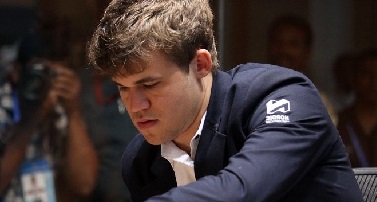 The Norwegian Magnus Carlsen won the 2013’s World Chess Championship in Chennai (India). After the tenth game, another draw, his three point lead was enough to secure him the victory. In the last game Anand, with black, entered the Sicilian (at last!), and Carlsen didn’t refuse to open it: 1. e4 c5; 2. Nf3 d6; 3. Bb5 Nd7; 4. d4 cxd4. The game drew after sixty-five moves. Carlsen (21 yo), is the all times youngest world champion.

Viswanathan Anand held the title since 2007; he will have the chance to challenge Carlsen on November 2014, but first he has to win the Candidate Tourney, which will take place at Kanthy-Mansysk (Russia), from 14th to 30th of March. These will be the other seven candidates: Valdimir Kramnik, Dmitri Andreikin, Veselin Topalov, Shakhriyar Mamedyarov, Levon Aronian, Peter Svidler, Sergej Kariakin. The Ukrainian Karjakin is 23 yo; he become Grand Master at age twelve, the youngest in the story of chess.

One Reply to “Chennai 2013: Magnus Carlsen is World Chess Champion”