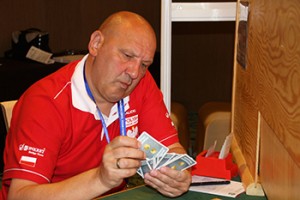 The time has now passed when the outcry surrounding our partnership can harm our colleagues, who I sincerely congratulate for winning the World Championship. I only regret that we were unable to participate in this success, although this is not the least of what I regret, since before we had even returned home we were lynched and sentenced by the Internet press. Even though the damage inflicted is now beyond repair and the end of our mutual career has become fact, I have to stand in defence of our long-standing partnership.

As our Chairman already pointed out, we garnered quite a few enemies, like those who lost to us in different events, those who felt we had taken spots that belonged to them or those on various international teams or the Polish National team. Without going further on this subject, I’ll get to the issue at hand. I strongly suspect that all the arguments against us were manipulated and calculated to appear in such a way that none of the readers would be able to verify them, for the long and painstaking work that would be required. This is how we have been treated by those accusing us. We were attacked three times after each preceding attempt ended in failure.

The accusation that most impacted subsequent events occurred just before the Bermuda Bowl, in which Boye Brogeland presented two matches with an analysis of 6 deals and on the basis of this information and without even a few days for analysis the WBF commission believed Boye and withdrew our invitation to the Bermuda Bowl. This accusation has already been greatly discounted. I suggest you read Krzystof Jassem’s article “Rumour and Mathematics”, which in any case I feel lets Brogeland off lightly. Regardless of what conclusions you reach, notice how easy it is to manipulate opinions on the Internet.

When the first accusation did not deliver the expected result, the next attack was launched – on our mannerisms on opening lead. And here the method of operation was very similar. There were no analysed hands, intentionally chosen clips from the video recordings and no correlation to the leads made. Of course, no one bothered to check what the typical mannerisms are for us or many other pairs in stressful or tiring situations. This is exactly how players behave who have for their entire bridge lives filled out scorecards and entered the scores into the bridgemates. After analysing 336 deals from Opatija 2014, half of which we were on lead, you won’t see one hand, including part score deals, where a lead was suspicious or very lucky. On the other hand there are several deals in which we didn’t lead well in simple situations that cost us a lot of points. Take the deal against Brogeland, where I personally made a serious error from lack of knowledge about declarer’s distribution. Despite the lead of the ace of hearts and a club continuation, we managed to let the contract make, although that would have seemed impossible. 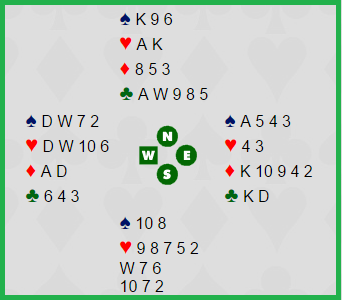 I ask for further questions, since the documentation of Opatija 2014 is incomplete.

The third attack came a few days ago. Here, in the face of forthcoming decisions by official bodies, the prosecutors did not even get the facts straight. They appointed their jury and tried to push through the revived theory of Brogeland’s. It came out just like they wanted it to, but look at the first two hands in their analysis. 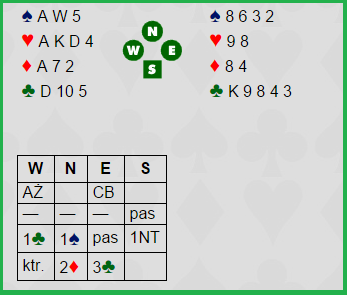 Kit Woolsey’s analysis: 3♣ close to the pass – a weak bid.

Additionally, Adam’s double, which is closer to the pass than my 3♣, was not properly analysed. He in fact had AJx AKQx Axx Q10x, or a 20-count, but pointing this out was not in the interest of those making the analysis. 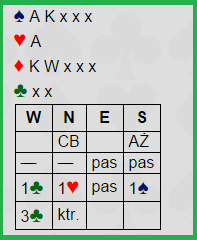 Kit Woolsey, who took on our case for over a month, didn’t even bother to familiarize himself with basic sequences. He twisted his comments to support the theory he had formed. Of course, in the presented deals the finished auctions are not given. This is flashy proof in the same style as the accusations. I hope, that you will not allow yourselves to be manipulated by Internet sharpsters.