In the Middle Age there were troubadours that went around to courts and squares to sing stories of arms and loves. Sometimes the protagonist of the story was the troubadour himself, as Manrico in “Il Trovatore” by Giuseppe Verdi, or as this hand, that rebelled to conventions, tore them, and commanded the players to sing her the way she wanted. 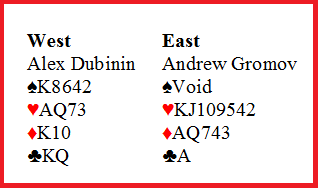 There are fourteen comfortable tricks and all the controls, however it is not any easy to identify the key cards; in facts at other table didn’t succeed in the task (6♥+1). Dubinin-Gromov play Precision, that is strong club from 16 HCPs and 5CM. 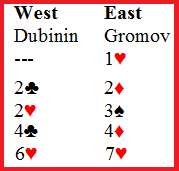 – Gromov’s 14 HCPs are worth not less than 17 because the long and good suits and the richness in heads; since Russians are playing Precision, strong club from 16, the opening had to be 1♣. However, as also pointed by Eugenio Chiaradia in his Neapolitan Club, the more hands are distributional the more they need that the auction were descriptive; thus this hand demanded to be opened by his natural suit, heart, even if the strength was more than enough for entering the rank of – Dubinin’s 2♣ is game forcing.

– 2♥ is a distribution asking relay; the last step of the ladder was 3♥, which would have showed the 1-6-4-2; thus 3♠ might be out of system. It looks an attempt by Gromov to get the captainship of the auction, but again it is the hand that is commanding here, not longer conventions.

After 6♥, let’s put ourselves in East’s shoes. West has not minor aces (we have them); also has not the spade ace (would have bid 4♠ over 4♦). Then his 6♥ − by jump − cannot be vindicated without both of the key cards in partner’s red suits.