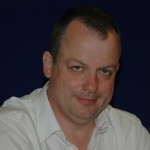 Last Tuesday (June 19,  2012) Tom Hanlon (Ireland) was a guest of the Bridge Live Show, broadcast on BTCC (BridgeTopics.com Channel) live from Dublin, where the European Team Championships are underway.  BTCC is a new web TV produced by Neapolitan Club and BridgeTopics.com.  The interview was hosted by Jan van Cleeff and  Laura Cecilia Porro. We publish here a short summary.

As usual, we start with five dilemmas. We give you 2 words and you have to choose one of them. The first one for you, Tom:  Irish stew or coddle?

Tom. you are also poker player and you wrote a book on both games…

Yes. Andy Murhpy ghostwrote it interviewing me. To be honest I like poker but it’s a need to an end, I use poker to gain enough money to play bridge, I do not play much bridge professionally, and this is thanks to the income from poker.

How is Ireland doing so far?

It has been a mixed week, we qualified all right but our position has deteriorated because of the carry-forward, some of our big scores have been dropped because they were against teams which did not qualify. It is a bit of a disappointment at the moment, but we will get ourselves together and try to achieve our goal of Bermuda Bowl qualification.

In Warsaw European Bridge Championships you were second in 2006, with the same team. Can you compare the two experiences?

In Warsaw we were a little bit more isolated, thus you feel the team unity, at home you have more support but also more distractions, a lot of people interrupt you as you go from match to match or discuss system. We prepared very hard for this event, we thought the format would support us because we do not beat up the small teams not so much. We thought that with no carry forward from lower ranking teams we would do a bit better. We are disappointed, in Warsaw we were the first team to beat Italy. We were hoping to get at least a draw here, but we are not giving up hope yet, one good result would be enough to bring us back to the qualifiers’ spots.

Can you tell us how the partnership with Hugh McGann started?

In the Irish team we have I think the longest standing partnership in the world (40 years). Hugh and I started as juniors, we went to the open in 1994, and we played every year since. We are close friends, we do not quarrel at the table and rarely after, if someone has done something wrong we wait for a few hours, and then discuss it with a cold mind. Everybody tries really hard, it is best not to talk about it for some time and then get back to it.