Silvio Sbarigia is a pharmacist; he was born in Rome and lives there. He has won the European championship in 1975 with legendary Blue Team, runner up at 1974’s and at Olympic games of 1976. His bridge problems aren’t difficult; just we need to think on a plan and to avoid the instinctive playing. Todays’ quiz is called “Depth”: In the depth of the sea there are things that cannot be seen swimming in the surface.

This hand was dealt in the board 6th of the finals of Poznan Open European Championships, on 29th June of 2011. There are eleven tricks: where should be found the twelfth? The Turkish Mine and the Dutch Simmons (women final) tried the club finesse, whereas the French Piganeaù (senior) and the American Rodwell (open) dived in deeper water. Won the lead, they both played ♦K; on the spade return, they took by ruff on Dummy and played diamond again, ruffing in hand by ♥9 (it looks that Rodwell did it by six, but it’s maybe a mistake of the vugraph operator); ♥6 to ace and third round of club: the queen fell, the hand ended.

This plan hides its beauty inside the notes.

Let’s suppose the diamond queen is fifth in East: it needs another entry in dummy to finessing, and it will be found ruffing the spade ace! However, this is possible only if the hearts break weren’t 4-0 and – and – if in the first draw of hearts the 8 would appear on table, otherwise there is the risk that East could overruff the third round of spade.

Let’s now suppose, instead, that both opponents respond in the third round of diamond; the queen doesn’t appear but another diamond ruff is impossible or unadvisable. Is it already time to finesse the club queen? Or does this generous deal yet offer another chance? Yes, it does. 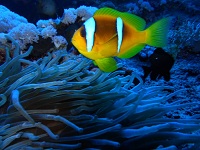 Swimming toward the bottom, a deeper analysis shows that the club’s structure allows a Double Entry Squeeze, also called Inverted Squeeze. These jargons means nothing but the communicating menace, here club, has two master cards, one in dummy and one in the hand: so there are two entries, one each side. For those who aren’t acquainted with the squeeze stuff, take this as “easier to do”.

The play goes as seen before. After the third round of diamond – we are supposing that the opponents follow the suit and the ♦Q is still on – the Declarer runs the free suits; on the squeezing card West (or East), has to part with the diamond queen or with the club queen’s guard. Note that, with the same cards but without the two entries in club, the squeeze is useless; the reader himself can verify what happens holding AKJ in hand and 109 in Dummy or, viceversa, holding AK in Dummy and J109 in hand. 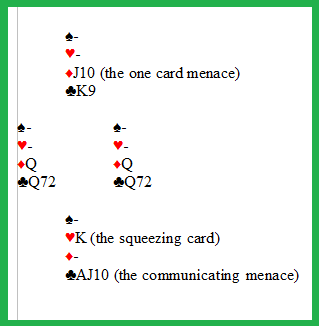