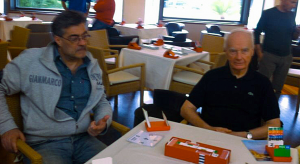 The bridge week of Montegrotto has started on Tuesday with “One Hundred in Two”; this is a national pair tourney where the player ages’ sum must be one hundred of years or over. Maria Rosa Sterza and Andrea Manno won it before Ida Jacona and Franco Cedolin; third came Enrico La Ferla with Aldo Gerli.

After the “One hundred in Two” there has been the Mixed and Women Pairs (19th-20th), won by Carla Arslan and Paolo Clair before Maria De Goetzen and Giovanni Benvissuto; third Elisa Romano and Pierandrea Marinoni.

The third and last pair tourney was the Open, won by Andrea Manno – the same who won One Hundred in Two – with Massimo Lanzarotti; they made 65,66 per cent. Second placed were Andrea Buratti with Carlo Mariani (63,44); third came Fabio Lo Presti with Marco Monti (59,91). It must be noted in this tourney the high score of the winners and the detachment between the second and the third placed.

The International Team is starting tonight.

One Hundred in Two »