Two weeks ago I started a class of bridge at Ascoli Piceno’s Circolo Cittadino (City Club); my three pupils, Cinzia, Giampaolo and Valentina didn’t know anything of the game, it was their very first time at the table. I dealt a deck, turning up the last card, and I started to explain the Whist. I pointed out that it needed to carefully watch and remember any card. Later, at home, I received an email from Giampaolo; he wrote about card memorizing and asked me:
…Are there techniques to develop some specific memory?… Could be possible to make a choice of what might be more useful to memorize?
In my opinion, Giampaolo’s asking dealt with a main key of bridge thinking, and it deserved many responses, not one only; therefore I forwarded it to others. Today the responses from Cristina Golin, Jill Meyers and Eric Kokish. 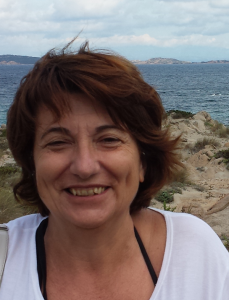 Cristina Golin – This question is akin to a question which I ask myself since when I started to play bridge: why it’s easier to me to remember the cards playing bridge and very difficult or exhausting playing other games, for example the scopone scientifico [a pair game, very popular in Italy, where memorizing cards is even more crucial than in bridge. There is a wonderful Italian movie about it; it was featured also by Joseph Cotten and Bette Davis, her last movie. [Click here for more »].

I think that there are three factors: the interest toward the game, the attentiveness, and memory. The interest there is or there is not; the attentiveness is said being obtained by suitable techniques, (I drift always off when I try them). About memory, I know there are techniques to reinforce it (as the “method of loci”, but I haven’t sense of direction and I get lost) but in my opinion I think it more worth the practice than the theory [In the text: “più pratica che grammatica”, an idiom] i.e. much, much drill.
Alas, today the memory is drilled very little, either in the school world, which banned almost all the mnemonic learning, or in the playtime (it is suffice thinking how much important were card games in the leisure), or in the work breaks.

In my opinion there is nothing to do about, only as the deals go by it could be got the skill to remember all the cards (and if drill has to be, it cannot be restricted to few hands once a week!!!). 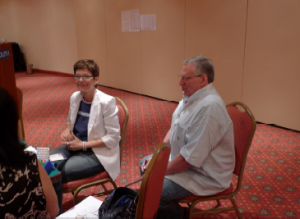 Jill Meyers – For me I don’t have a method or a mnemonic. I just have one of those brains that remembers numbers and I am an “obsessive” counter, not just at bridge. Perhaps it is my brain’s way of staying ordered. When I was a child I used to count the pages in the telephone book – counting has always been a way of life to me and I think that helps memorize. Also, I just happen to have a good memory.

Eric Kokish – I would have answered differently when I was younger and my thinking was much more clear and natural. Each hand is different. I start by considering how a suit might break and as the play develops I can eliminate or confirm certain breaks – it is the suit division and not a straight 1-13 count that makes the most sense. Each discard does require developing an overall picture of that suit too, but once a suit is “known” to be (say) 4-1 we are not counting up to 13 but rather storing the information that it will take four rounds to exhaust that suit or that the player with four can’t have certain other distributions while the player with one has many more empty spaces to fill. Discards usually play a major role because players normally discard what they don’t need and keep what they need.

Then we know that each hand has three odd suits and one even suit or vice versa. That helps to imagine the count or confirm it.

Most bridge hands involve locating certain honors and distributions and there is no real substitute for building a picture consistent with the bidding and play to date. Most players are self-interested so their play will inevitably reflect that. While it’s important to know percentages for suit breaks, the idea of putting yourself in an opponent’s shoes often helps even more.