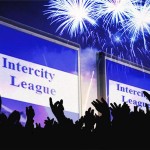 This is the first victory of the Polish team, but none so far has won more than once, but Ascoli Piceno; Wroclaw got rid of Ascoli in semi-final. These are the new champions: Voytec Rozwadowski, Jacek Baranowski, Kazimier Sugocki, Piotr Brzezinski, Maciek Hutyra, Rafal Wolanski (playing captain). And these are the runners up: Helen and Danny Kane, John Murdoch, Jim McMenenny, Eyal Ben Zvi, Cliff Gillis (playing captain).

It’s interesting as Wolanski, Polish, lived in Scotland until few yeas ago, then he was eligible to play the Home International Series, i.e. the Camrose Trophy, and in facts he did in 2009 in Scottish team. Needless to say that his partner was right Cliff Gillis, yesterday opponents’ captain!

The result has been 72-67 in thirty-two deals, not for weak hearts: after the first half Wroclaw was leading by 45 imps; after thirty out of thirty-two hands, was Glasgow the leader instead, by six imps.

Intercity League new edition – spring 2013 – will start in the second week of March.