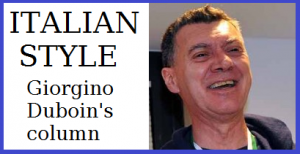 The Vanderbilt in Reno was the last tournament I played with Zia Mahmood. This was our last event as a partnership, since we had already made long term plans with other partners. This decision stems from Lavazza team’s project and not from any issues between us.

At the start of the tournament we knew we had what it takes to get a good result: we were the first seed (since we had won the previous edition); Madala and Bianchedi wanted to prove to be a strong pair, and to show there was no reason to miss the partnership with Bocchi; for the same reason Norberto wanted to give his best with his new partner, Diego Brenner; Diego did not want to waste an opportunity to perform well with such a good partner; and lastly Zia and I wanted to have a good last game, to leave a good memory – ‘maybe one day you will miss me’ we thought.

After the bye, we faced Rippey. In the third segment , I was north at favourable vulnerability and picked up this hand:

They led the KH and dummy tabled:

I ruffed the lead in hand with the 3S and played a club to the king and dummy’s ace. I ruffed another heart and played my last club. East discarded a diamond. I then played another club which East again refused to overruff. I already had 5 tricks, 2 clubs and 3 ruffs in hand, so I could add the ace of diamonds (6), a heart ruff (7), a diamond ruff (8), a club ruff (9), and one more trump trick from JT (10). 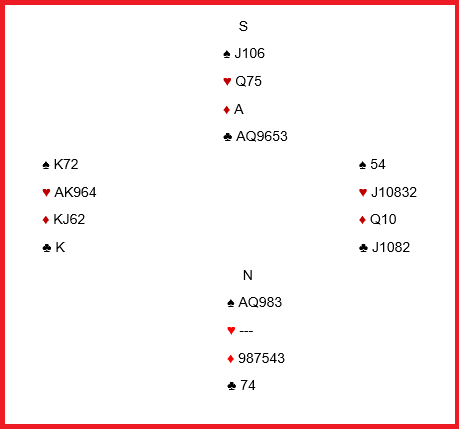 As you can see, if East ruffed the second club, or overruffed the queen of spades with the king, he could not stop me from setting up the clubs because he has the long spade holding, so I would have made my contract anyway.

We played up to the initial expectations and, despite a number of tough matches, we marched on towards the final victory without a glitch, winning almost all matches by a comfortable margin.

I am very happy about the result, and surely a pinch of luck contributed to our performance, but I would like to add a little about each pair.

Alejandro and Agustin played very well. This result will strengthen their partnership understanding and trust. The hands they played will be useful to build a future together and their few mistakes will be a reminder in future matches.

Norberto and Diego proved that they can play very well together so for them this tournament was a partnership building block. Both pairs ‘played’ for today’s audience and for tomorrow’s too. (The Italian text contains a pun on the meaning of ‘play’ referred to cards and music, Translator’s Note)

It was different for Zia and me, as we did not have anything to build. Nontheless this is probably our best performance. We ‘played’ for the pleasure of doing it, one last time, to leave a good memory to the public and to us.