As promised in my last editorial, I give you a report of the latest American competition the Lavazza team played. Just before leaving, Alejandro Bianchedi told us that unfortunately his mother had serious health issues and thus he could not join us, so we told him not to worry about us, and to take care of her in hospital. So we ended up playing four handed the Vanderbilt Knockout Teams: Bocchi-Madala and Zia-myself. We had to change our initial expectation since our path to the  finish line has been like the ride of the Valkyries; only in the final we lost a segment against team Diamond, which I like and hold in great esteem. I congratulate my teammates Norby and Agus for an excellent performance, but in this editorial I would like to write about my partner, Zia the funambulist.

The first match immediately offered him an opportunity for a brilliant play. He played in 3NT after West opened with a weak 2♠. (Round of 64) 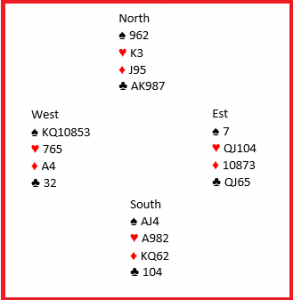 The lead was ♠ King. After winning the first round of the suit, Zia ducked a ♣, East won the trick and returned ♥ Queen, won by dummy’s king. Now Zia played a ♦ to the King and Ace, West returned a ♥ to the 10 and Ace, followed by two more rounds of hearts.

The situation now was: 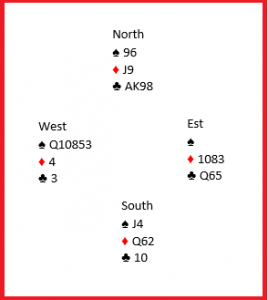 Now Zia played a diamond to the Jack, the Ace of clubs and two more diamonds to squeeze East and force him to set up dummy’s clubs, easy is it not? But would you, as Zia did, take care to unblock the 6 of diamonds under the Jack, in order to keep the 2 and prevent East from discarding his diamonds, thus avoiding the endplay?

Let us have a look at some bidding creations by Zia. (Round of 16 Segment 3/4)

After passing as dealer, he witnessed the following auction

Some may wonder why we are looking at the bidding when this is a defence problem. Maybe it is so for laymen, but not for Zia, who at this point in the bidding doubled to ask for a spade lead. We could blame South, who took this out to 5♦, with ♠10 ♥AQ10 ♦KQJ108 ♣A753, thinking it would be a better contract if partner did not have many points in spades. We cannot really blame him, but 3NT was stiff and 5♦ goes one off. 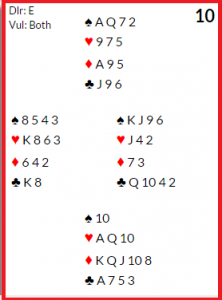 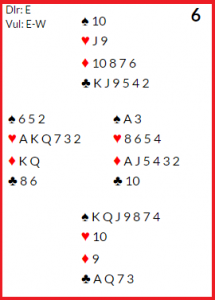 Now a natural auction followed by brilliant play. (Round of 16 3/4) 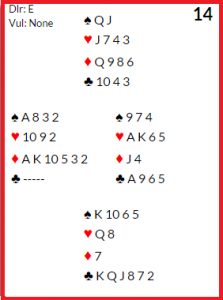 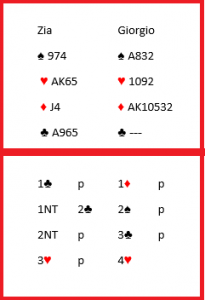 3NT and 5♦ had no chance, whilst 4♥ is the only makeable contract. West held  ♠ K1065 ♥ Q8 ♦ 7 ♣ KQJ872 and led his singleton diamond. Zia ducked and after the queen of diamonds and a ruff, he won the spade return with the Ace. Then he played a heart to the Ace, Ace of clubs and a club ruff, followed by two rounds of diamonds on which he pitched two spades, whilst east had to follow suit. He then ruffed a spade in hand and a club in dummy, and the final coup was to play up to his 6 of hearts (if east ruffs with the 7, Zia discards thus endplaying him with the K6 tenace, otherwise ruffing with the 6 guarantees the contract).

On Sunday night while I was going back to the hotel from Bourbon Street, I gazed into the sky, but I could not see the moon: we had won the Vanderbilt, Alejandro rang us to let us know that his mother was able to go back home and so I thought that it had been a “Perfect day”.

Perfect day is a song from Transformer (1972) by Lou Reed