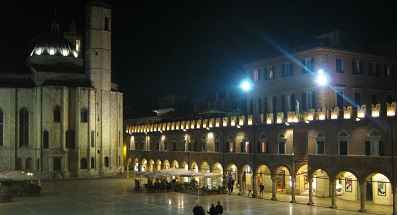 The town was founded several centuries before the same Roma. In the third century b. C. it became Civitas Foederata (confederate) to Roma, but two centuries later Ascoli headed the Social War, a uprising of many Apennines’ towns that demanded the right to Roman citizenship. Roma settled the matter by its usual practice: first sieged Ascoli, stormed it and slayed most people, then magnanimously conceded what had been demanded.

The urbanistic frame of the town is the typical Roma’s, also there is a Roman theatre, but the architecture is more medieval: Ascoli is called Hundred Tower Town; the same Bridge Club is guested by the Circolo Cittadino in a fourteenth century palace.

The bridge tournament will be held in the same day of the Quintana of July, that is on 11th July. The Quintana is a joust played twice a year since the end of the twelfth century (this year on 11th July and 2nd August). The joust is in honour of Saint Emidio, the first bishop of the town, who was martyrized on 5 August 303 because he had converted to Christendom Polisia, the daughter of the Roman prefect. The Bridge Tournament is at its first edition.

The program, according to the matter of this day, consists not only of bridge. At 10.30 it will start a guided tour of the town beginning from the cathedral in Piazza Arringo; the church was built on IV or V century upon a preceding heathen temple. Another important and beautiful church that will be seen is the Romanic one of the Saints Vincenzo and Anastasio.

The Bridge Tournament will start at 15.30 and will end at 19.00. After the prize giving, in the same Circolo Cittadino there will be a brief dinner with the taste of several Piceno valley’s wines (7.00 € per person, dinner and wines). Then, the players will go into the town, among ancient stones, to spectate the thousand people pageant, dames, knights, pages, magistrates and others led by the mayor, who in this day he too dresses, walks solemnly and is called as in the past: the Magnifico Messere. 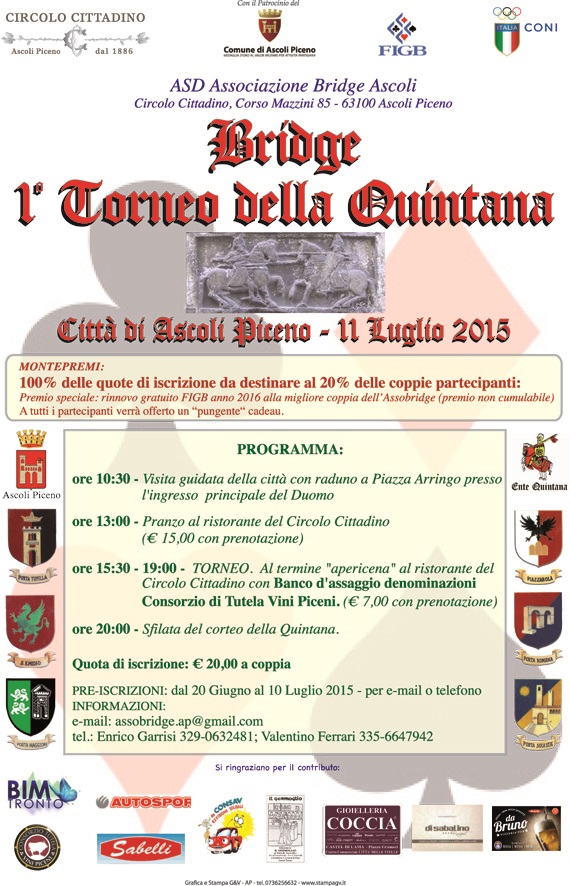