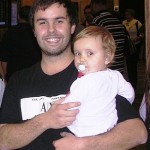 Our friends Fernando Lema and Ana Roth, of the Confederacion Sudamericana, published a fine hand played by Agustin Madala in the Yeh Bros Cup that Team Lavazza won in Wuxi (China).  In one table E/W (Antonio Sementa and Giorgio Duboin), played 3♠, scoring 11 tricks for +200. At the other table Agustin Madala, the Wuxi’s Illusionist, displayed his art… Many times a player creates an optical illusion to confuse his opponent and make him mislead; this is what happened in the 7th hand, 7th round of the qualifying stage, against Japan. Agustin Madala himself tells the story. 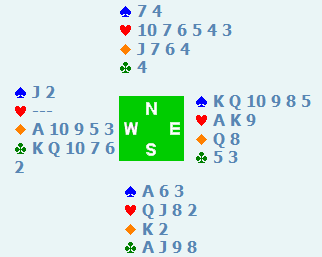 “Norberto lead the ♠7 and when I saw the dummy, I already had the exact West’s distribution: 2-0-5-6. If not so, West would had passed over 3NT. Dummy played the ♠K, I played my ♠A and returned the ♠6. West won with dummy’s ♠Q, Norberto’s card was the ♠4. At this time the declarer is at home, he only has to play a club to his ♣10, just need to repeat clubs until I take my ♣A and I am endplayed. If I return a trump, he wins and plays another trump and I am again endplayed, all my cards give him the contract.

Anticipating this, when West played a club from dummy I played my ♣J! The declarer, Hiroki Yokoi, won the trick with his ♣K… and began to think:

If I had ♣AJ in the suit, and he played an honor from his hand, I won with the ♣A, return a ♠ and Norberto can make his ♣9 “en passant”, afterwards Norberto changes to a diamond, and my ♦KJ defeats the contract.

All this made West play the ♣2 seeking for the drop of the ♣A in my hand, which had been my original intention. I took the trick with the ♣8, cashed the ♣A and returned the ♣9, not only avoiding the endplay, but generating an endplay for the declarer, result: 1 down. Final act, +100 for N / S, which added to the +200 at the other table gave the team 7 IMPs.”.