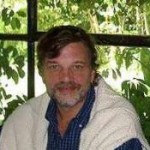 The “El Firulete” is one of the most known tangos, written in 1958; its lyrics refers to the tango importance over the new music invasion to the Buenos Aires culture. The word “Firulete” comes from the word Feroleto (small flower) and refers to the decorations. The Firulete is a very delicate and complicated tango movement that only can run the great dancers. 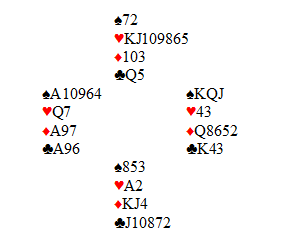 What about trying an intrafinesse? A coup described by the Grand World Master Gabriel Chagas.

Baldursson had a plan ON: win the trump or club return in dummy and play the Q diamonds, capturing both honors: K and 10… South knowing  what was going on…played a diamond, but Baldursson stick to his plan, played little from hand, and smiled when he saw North’s 10 diamonds over the table, he won the trick with dummy’s Q diamonds, run the last trump and claimed 10 tricks.

The Bols Bridge Tips is a yearly contest between the best playing ideas submitted by great champions in the periodicals they use to write; it’s

sponsored by the Bols Company of The Netherland, an ancient firm ofliquors. The intrafinesse, as seen in this hand, consists in two alternate finesses to both opponents, the former toward the – supposed – short honour side: the Declarer so loses only one of three missing honours.  Gabriel Chagas, by it, won the prize in 1990.