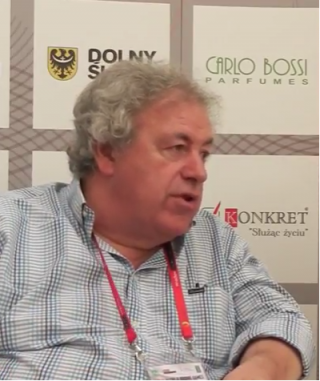 Jan van Cleeff realized in Wroclaw an interview with Philippe Cronier, member of the WBG Championship Committee and Chairman of the WBF High Level Players Committee.  We offer here some excerpts of the interview.

JVC:  Philippe Cronier is not only the technical director of the French Bridge Federation, but he is here also as a member of the Championship Committee. Sometimes life is not so easy for him, if I may say, especially if you look at the day when the USA – Spain quarterfinals match in the Open category started.  Can you explain a little bit what was going on there?

PC:  Yes, just before the beginning of the fifth session, the Spanish captain went to the director, I think it was Antonio Riccardi, and told him that he had a complaint about the way the American players, especially Lall – Bathurst, open in third seat when green against red and the Spanish said: We accuse them to open every time when green against red without disclosing procedures on the convention card and they know about that but we don’t and it’s unfair.

JVC:  I have a question — I thought it was non-vulnerable tout court…

PC:  No, that was not the Spanish statement, it was green against red.  And so, the Spanish captain gave a file to the director in which there are some boards played in this championships and one coming from the Spingold, I think, or something like that, and he asked the director for a ruling. The director replied that he will take care of the complaint, but he has no time to make a ruling on such a difficult subject and so asked the Spanish team to begin to play; that a ruling can be made but that it would be given at the end of the match, maybe if it is possible. And the Spanish captain refused and said that either the American captain has to change his lineup and not make this pair to play, or they get a ruling, or if none of that happens, they will not play at all.

JVC:  So they did refuse to play.

PC:  Yes, they did. And, the director just says that the time to play is coming and if they don’t want to play they will be late and that the penalty for being late is 1 IMP per minute.

JVC:  Yes.  But is it also true that when a 40-minute period of time would elapse that then they are forfeited from the match?

PC:  Exactly; 40 minutes late is too late to begin the match and they will be expelled.  The director said that to the Spanish team, and after 32 minutes finally the Spanish team decided to sit and play and so the director normally applied the 32 point penalty for late arrival and at the same time the Championships Committee was informed about the complaint and Max Bavin, who is the chief director, went and asked not for a ruling but at least an idea — an assessment — from the Championships Committee. After examining all the material that we had, the Championships Committee decided that: First, the Spanish complaint is not efficient enough at the moment to make a ruling. Second, the file will be sent to the new High Level Players Commission. Third, that it is absolutely not normal that the team doesn’t accept to play when the director asks for them to play, so they have to be penalized.  But, at that point of the match the normal penalty of 32 IMPs for being late was not exactly the good one to put because the Spanish team was there, they were at the table.  So, the committee decided that a procedural penalty would be put in place of the late arrival penalty.  So the late arrival penalty was cancelled by the committee and a 10 IMP procedural penalty was given to the Spanish team.

JVC:  So it was changed from 32 to 10 IMPs.  I was informed — from the Spanish side of course — that they tried to get in touch with the directors about their findings hours before the play started.  But people couldn’t get in touch with each other, maybe it has something to do with the marathon here in Wroclaw.

PC:  Maybe — I don’t know, maybe you have more information than I have because you are a journalist.  But I have to say, that the normal hour of the beginning of the play was, on this special Sunday, 5:30 because of the marathon, and that the Spanish succeeded in seeing the director , I would say, about 4, and such a file in any case needs many hours to be examined.

JVC:  So finally, the Spaniards won their match and the 10 IMPs difference didn’t make a change to this and that is a good thing, but I’m also interested in where we are now.  Is there still a complaint of the Spanish team against this American pair and is there also a complaint by the Americans against the Spanish attitude?

PC:  As far as I know, but I’m not on the Appeals Committee, so you have to ask the representative of the Appeals Committee, I have a procedure opened against Lall and Bathurst to see what happened.  The file is being inquired a little more. My personal opinion — and it’s only my personal opinion —  is that it may be also a cultural problem.  When you play in the American Nationals, as I sometimes do, you see that a lot of people used to open very light openings in third position.  I don’t know what happened here, but the Spanish team is maybe not so used to play in the nationals and could have been shocked by that, but surely by law point of view if you do that and you do that in a partnership you have to put that on the convention card, and it’s a lack of disclosure not to do it.  That’s for sure.