Hugh Kelsey wrote in his “Kelsey on Squeeze Play” that the players who do not study the squeeze technique are denying themselves “…The most exhilarating moments that the game has to offer…”. The statement is true not so much for the squeeze itself – most are very simple – but mainly for the manoeuvres that need to establish it: a task that belongs to the higher playing technique, regardless of the target, not necessarily a squeeze. It is matter of facts that a player who never studied the squeeze is often short of mapping out as declarer.

In the hand we are showing there is one of those special moments which Kelsey was talking of: this squeeze is simple, but the preparation has the beauty of a fine lace.
Dummy
♠AQ3
♥AQ104
♦108
♣A742

Contract: 4♥. West lead ♦K and diamond; East took by ace and followed a third round of the suit.
Planning. There are eight tricks: four hearts by length and one by ruff; one spade; two clubs. Another trick has to come from spade finesse, and the tenth could lay into the 3-3 club break. Or into a spade-club squeeze if West – the holder of ♠K – also is holding four clubs.

North ruffs the third round of diamond, then plays trump ace and queen, taken by South’s king. It needs to overtake because South have anyway to finesse spade forthright, and if the trumps break 4-1, as it actually befell, it needs to stop the trump clearing in order to control the diamond run from the short side. The spade finesse succeeds (otherwise the contract is set), and it’s time now to give the lead in club, rectifying the count for a squeeze -that is getting to the state of “all winners but one”- or simply to promote the fourth club if the suit breaks 3-3.

East wins the trick and return clubs, taken by Dummy’s ace; now it’s time to run out all trumps, coming to this four card final: 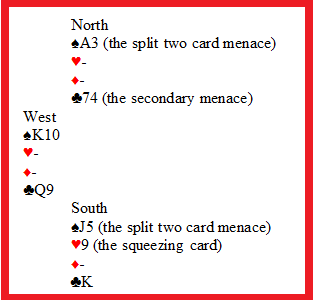 South plays the squeezing card, which in this case also eliminates the last East’s trump; West, started with four clubs, is compelled to give up the spade or club guard; North discards according to what done by West. 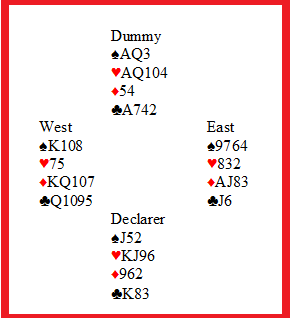 Homework. This is a split two card menace squeeze, then it only threats the left side of the squeezing card. Suppose now that East holds the spade king and clubs, not West: being unaware of the danger (East doesn’t know the squeeze), he ducked the first round of spade just to enjoy after the dismay of the Declarer. How to punish him? Suggestion: after the club round, take by K the club return and still delay the trump clear…