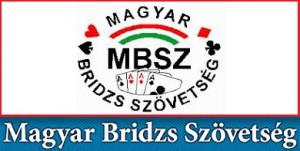 The Hungarian Bridge Federation (Magyar Bridzs Szövetség) announced its candidacy to host the next European Team Championships which will be held in 2016.

Later this year a delegation from the EBL (European Bridge League) will carry out a formal inspection in order to choose the appropriate venue.

The contract between the EBL and the Hungarian Bridge Federation for the 2016 European Team Chmapionships  will be signed during the 2014 Champions Cup (Milan, Italy, November 13-16, 2014).