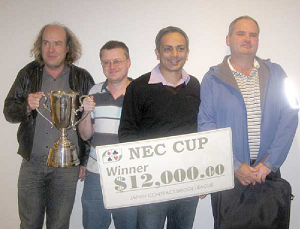 17thNEC Bridge Festival – NEC CUP Open Tournament – Down Under reached the 2012 NEC Cup defeating in the final match Bulgarian All Stars by a tight margin: 124-99,5. Down Under team is composed of  Peter Newell-Martin Reid from New Zeland and Tony Nunn- Sartaj Hans from Australia. The runners up are Valio Kovachev, Vladi Isporski, Manol Iliev and Hristo Hristov from Bulgaria.