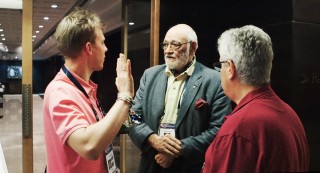 A popular Norwegian TV, TV2, will broadcast a documentary devoted to Boye Brogeland on April 6th, 2016 at 10.40 pm. The title is “The Whistleblower”. Therefore, I asked Trond Høines, the author of the documentary, to tell us something about this event.

LC: How was this project born?

TH: The film project was my idea. I am a bridge player, not on an international level, but decent. I first read about Boye’s accusations and asked the producer, Tommy Gulliksen at Norsk Fjernsyn, if he was interested in making a documentary film about this story as it was developing. Tommy has no connections to bridge. Tommy then asked Norwegian TV 2 if they were interested in financing the film and broadcasting it. TV 2 liked the idea, and will broadcast the film the 6th of April at 10.40 PM.

LC: Are you going to relize an English edition of the documentary?

TH: The film will air in native Norwegian language. TV 2 own the rights, and they may translate it to english if they get international screening. 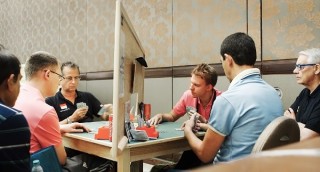 LC: Could you reveal the most important content of the documentary?

TH: We have followed Boye in national tournaments and also in Chennai last year. We have interviewed many different international bridge personalities, both players and sponsors, and of course the Norwegian top pair Helgemo and Helness as they were playing for Monaco with Fantoni-Nunes as teammates. The film will focus on Boye and his crusade towards cleaner bridge – his thoughts while risking both his income and the safety of his family as he went after many of the bridge games´ most influential players. We will discuss the legal rights of the accused as they were openly judged on the Internet, and never got to defend their rights.

(The pictures are from two scenes in the movie)