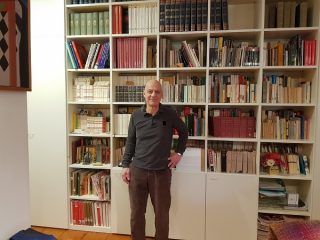 Other than being safer for no trump contracts, the sound opening allows to discover beforehand possible values for slam – or their want – and makes clear whom the contract belongs to, allowing to double for business even at score contracts, thus curbing opponents’ aggressiveness. Usually, the pairs which use the sound opening agree on being punitive any double after the first, being the first either punitive or takeout. Lastly, the sound opening cuts down the danger of multiple down, which in team match is almost ever unfavourable double score, when it doesn’t expose to a punitive double though we were in attack. The multiple down is frequent in no-trump contracts called without one stopper; the opponents run their suit, whereas we have to discard the winners in long suits to save the stoppers in the short ones.

In another hand, the partner opens 1♥; we have: ♠Axxx ♥Jx ♦KJxxx ♣xx. We respond 1♠, and he rebids 1NT. If we are playing the 5CM, we must pass: at the best we don’t have more than 23, and we don’t know anything about club, but that it is the opponents’ suit and that they there will lead. If, instead, the opening was solid, we would know that 1NT showed the stopper in club and diamond; therefore, even without special luck, we could count seven tricks with our cards, and with partner’s possible club stopper and diamond ace. Thus, we could make an invite by 2NT, and if the partner had more than the minimum, we would reach a sensible game contract with little risk of multiple down.

The sound opening is best suited for the four card suit opening, where the principle of preparedness can be fully applied, but it is useful also in 5CM. The difference between the two systems is that the latter is stiff either in opening and in rebidding, whereas the four card suit opening offers several choices in both the situations. The 5CM looks more aggressive because it is opened more frequently; however, this is not a quality, but the necessary warping caused by its stiffness.

Contrarily to what is common belief, the 5CM isn’t the modern system, but the most ancient. It was supplanted in the thirties of the past century by the four card opening and its principle of preparedness. It went back in fashion in 1953, set up by the American Alvin Roth, whose purpose was to more easily reach the major game contract in 5-3 fit. Actually, this fit is best suited for 3NT than for level four in major: the fifth card makes trick in both contracts, and the three card support rarely adds a ruff trick; it would need either a unbalanced dummy and strong trumps. This notwithstanding, in 3NT it is more difficult to make ten tricks, and in Match Points pair tourneys to score 420 or 620 instead of 400 or 600 is almost as essential as the fulfilment of the contract; therefore, Roth himself advised to play 5CM only in MP pair tourneys. How and why the 5CM could have become overruling even in team tourneys is soon told: the opening in the four card suit requires better technique whether to bid and to teach it.

Broadly speaking, the sound opening at level one in first or second position must be worth 13 points; it means that the HCPs can be less, but the want is to be made up by heads, unbalancing, and concentration of high cards into the long suits. Let’s split in four intervals the range from 0 to 14+ HCPs:  0-6; 7-10; 11-13; 14+; and let’s see when to open, starting from the border values, easier to define.

Hand by 0-6 HCPs. The hand is never to open at level one.

7 to 10. To be opened, the hand must be two-suiter by at least ten cards, and it must be endowed of two heads: two aces or one ace and one king.
♠Axxxx ♥x ♦Kxxxxx ♣x.
♠Axxxx ♥x ♦Axxxx ♣xx.
♠AKxxx ♥x ♦Qxxxx ♣xx.
The hands above aren’t worth the sound opening, but must be opened for the Principle of Anticipation. If South passed, he couldn’t show later is two suiter, also because possible interferences, and it would suffice even a weak support in one of his long suits to reach high level contracts either in attack, even in minority of points, or in competition. If the hand is by 7-8 points, there must be an head in each suit. It is undisputed that in these hands the opening should be in the higher rank suit, even being only fifth facing a sixth or seventh lesser rank suit; in facts, having a 6-5 two-suiter, the important news isn’t that one suit is sixth, but that both are at least fifth, thereby allowing to support one with only three cards (Eugenio Chiaradia). This can be accomplished opening in the higher rank suit, then rebidding the second suit and repeating it in the third round. Compare the following sequences:

The following hands, instead, aren’t to open:
♠Axxxx ♥x ♦Kxxxx ♣xx. Ten card only in the long suits. Compare this with the 1st above, with eleven cards, or the 2nd, with ten cards, but with two aces instead of an ace and a king.
♠Axxxx ♥x ♦QJxxxx ♣x. There is only one head.
♠Axxxx ♥x ♦xxxxx ♣Ax. One head is outside the long suit.
In the range 9-10 HCPs, one long suit could lack of its head, but it must be considered whether the hand would be more suitable for defence or competition rather than for attack. Over 10 HCPs, a 5-5 or longer two-suiter hand is always to open.

11 to 13. If the strength is only 11 points, the hand should be unbalanced; the 12 point balanced hand often must be passed; the 13 point hand often is to open, but not always. The criteria for opening are the Defensive Trick and the principle of preparedness. Other two criteria would be the concentration of the honours and the strength of the opening suit; but these will be dealt with in another article on the four card suit opening.

The Defensive Trick Criterion: the table Whitehead-Culbertson. Since the prime of bridge, the hand was esteemed by the point count criterion, introduced by the American Bryant McCampbell in 1912; this is the same widespread today. But already in 1922 the American Wilbur Whitehead suggested a more realistic unity of measure: the defensive trick, or the chance of honours and combinations of honours to take tricks in defence as opening’s criterion; by this way, the opener warranted a sure strength also for the business double against interferences. His standard table was as follows:
AK: 2 winners.
AQ: 1,5 winner; that is, one winner and 50 per cent of chance to win another trick.
A or KQ: one winner.
Kx: half winner.
To the Whitehead’s table, Ely Culbertson added half winner also to: QJx; Qx and Jx in different suits; stiff king alongside queen or jack in another suit. That’s enough, for us; Culbertson added other honour and ten combinations which we can disregard; he needed of them because until late Forties he used only the defensive trick criterion, thoroughly neglecting the HCPs.

To be opened in the range 11-13, an hand should have at least 2,5 defensive tricks, but the opening by the anticipation principle seen above; however it can still be passed also with 3 defensive tricks; with 3,5, the hand is to open always. Below there are some borderline examples, pass or open, all with 2,5 or 3 defensive tricks.

In all the above hands, the pass could make lost a score contract, never the game; for the game, the partner should have at least good 10 points in a unbalanced hand, with whom he would never pass in third position.

It is to be noted that in Neapolitan Club, a four card suit opening system, the hand 3rd is being opened 1♥; over the response 1♠ or 2♣, the rebid is 2♦, according to the principle of preparedness, which overcomes the long suit first criterion; analogously, the 7th is opened 1♠, being prepared to rebid 2♥.

In first position, we have: ♠AQxxx ♥Qxxx ♦Qx ♣Qx
The defensive tricks are only two; besides, the two unguarded queens are worth only 2 points or little more, not 4; therefore the hand should be passed. This notwithstanding, there is a problem of anticipation: what to do if the partner, in third position, would open 1♥? The responses 1♠, 2♣ or 2♦ might be passed; the responses 3♥ or 4♥ wouldn’t show neither the shape nor the strength; the former would be stingy, the latter extravagant. The less evil is to open, and in case of 2♥ response, bid 3♥. The danger is that the partner could have a strong hand and would hover too high; for example, up to 5♥-1. But the cards don’t know the system we are bidding by.

Conclusions
The sound opening is the one with 2,5 defensive tricks at least, and which follows the principle of preparedness, that is to say, being always prepared to rebid over any response from the Partner. A great two-suiter is always prepared, provided that the opening were in the higher rank suit; therefore, its strength can fall below 11 HCPs and 2,5 defensive tricks.

After the level one suit response, to rebid at level two a five card suit of a 5332 pattern needs a suit by at least AQxxx, and 14 points. This strength is enough to open 1NT, however the suit opening is preferable when one suit lacks even of an half stopper.

Over 13 HCPs, any reservation ceases; the hand must be always opened even if lacking of the due defensive tricks or being ill-prepared to rebid.