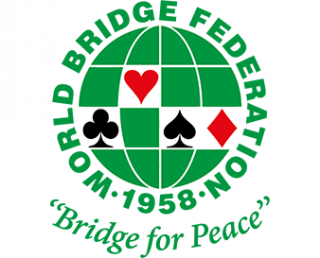 This is the WBF’s replay to Latvian Bridge Federation’s Letter, posted yesterday on Neapolitan Club.

President of the Latvian Bridge Federation

President of the WBF and Chairman of the Championship Committee

Co-Chairman of the WBF Championship Committee

Dear Jelena, I write in response to your letter dated 4th April 2022 in respect of various issues that you have raised. Article 49.2 of the By-Laws sets out the role and function of the Championship Committee (“the Committee”), which include inter alia as follows: The Committee is the governing authority of the Championship, as per the Laws of Duplicate Bridge [Law 80] and the WBF Rules & Regulations and will provide its managing and running. The duty of the Committee is also to consider important related issues and make recommendations to the EC for implementation.

The Supplemental Conditions of Contest were published on the WBF Website in the usual manner. Section 4.4 was updated on 23rd March 2022.

Section 3 Special Regulations regarding Covid-19 Protocols of the SCC state: Covid-19 Protocols and special measures are published on the WBF Championship Website and will be updated to reflect the current situation with regard to the pandemic. Please ensure that you check these regularly.

By entering the Championship, whether as a player, official or staff member, you agree to abide by them.

Section 4.4 Team Members provides as follows: In addition to a non-playing captain, each team may have four, five or six members. If an NBO wishes to replace a team member, or members, or if fewer than six players were submitted for invitation, such replacement or increase (each must be from the NBO submitting the team) may be added prior to the start of the first session of play with permission of the Credentials Committee.

However, the Executive Council reserves the right, following such approval by the Credentials Committee to place any restrictions on that team it deems proper.

In any case, after the start of the event, if one or more players of the same team are affected by Covid19, the NBO is allowed to provide for the replacement in compliance with the conditions set out in the above paragraph.

You suggest that the GCC points 3.6 and 17.4 were not followed. As indicated earlier, the SCC takes precedence in the event of any inconsistency between the GCC and the SCC. You indicate that a replacement player had participated in the Venice Cup and therefore should not have participated in a second event within the same Championships.

That player was no longer playing in another event as their Team had already been eliminated. You further suggest that the decisions made required vetting by the Credentials Committee as well as “no objections” from the Executive Council. All participants of these Championships have been subjected to the usual process to ensure that they are eligible to play – there is no basis for indicating that they are not eligible.

Finally, you request the provision of certain written documentation. First, the manner by which those who are considered to be eligible to play in the Championships are not subject to individual written approval.

The Chairman of the Credentials Committee is satisfied that the individuals that have been included in the Team of your opponent satisfy the criteria laid down by that Committee. Secondly you request written confirmation by the Executive Council to accept the USA 1 Mixed Team Substitutes. The Executive Council will be fully notified in due course of the decisions taken by the Championship Committee.

The President and the Championship Committee have the necessary power and authority to take such decisions as are necessary to ensure, so far as is reasonably possible, the smooth running of the Championships. Thirdly you request Positive COVID Tests relating to the USA Mixed Team and the substitutes. These are personal to the individual and not to be provided to their opponents or others. The tests were properly administered and there is no good basis or reason to suspect otherwise.