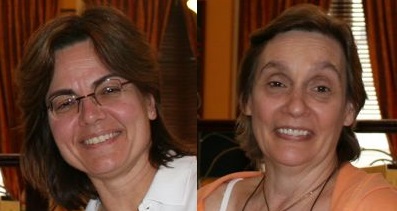 Karen McCallum is five times world champion, twice in Venice Cup (1989 and 1993). The 2011 Official Encyclopedia also reports that she edited many books, also the famous Larry Cohen’s book “To bid or not to bid”, which spread over the world the spell of the Total Trick Law (the TT Law is an axiom which states that the sum of the tricks won by each pair, playing their best suit contract, is equal to the sum of both pair’s trumps).

Lynn Baker got the second place in 2009 Venice Bowl as USA1, pairing up with Karen, behind China and before the France. She’s law professor at University of Texas, and Yale and Oxford graduated.

On Karen, the United States Bridge Federation (USBF), reports that she has got a library by more than 50,000 volumes.

The following comments are on the basis of Karen and Lynn’s Convention Card and System Summary Form sent to USBF; I didn’t asked them about it, so any mistake in deducting is my fault only.

The paradigmatic adjective suitable for Baker & McCallum is “aggressive”; they are more aggressive than the well known Rodwell-Meckstroth. Their General Approach says “Aggressive Standard American”; below, in full case letters they added: “Any action may be lighter than Standard”, with “very light” openings, overcalls and preempts. The one level opening can be as weak as ten point in non vulnerable balanced hand; for example (my guess):

The major opening is by fifth, but “occasional 4’s”, even in first or second seat.

Speaking of aggressiveness, in general, it is deemed a modern feature; but this is true only if compared with the bridge of the fifties and sixties; but if we take a glance to the twenties, a century ago, our bidding style appears boarding school girl stuff. Overcall and jump shift response by zero points were the rule, and about the one level, look here:

It was Wilbur Withehead of the Knickerbockers Whist Club of New York who, in the twenties, first stated the twelve point opening criterion: “A queen over the average hand”.

About responses, the 2/1 is only forcing one round, not to game; this was the standard until a twenty of years ago, and it is yet in the Standard American Yellow Card (SAYC), but rarely used now; none of the other pairs use it.

It’s an odd ongoing that of the two-over-one response: it grows as the years went by. In the early times of contract bridge it was an absolutely sign off, a so called “denial bid”. Partner, it entreated, I’m very weak, and void or singleton in your suit; please pass. Later it grew in strength, forcing one bid, then committed to rebid within 2NT, until the today game forcing feature. I wrote its story two years ago. *

The Baker-McCallum’s System also says: “almost never pass partner’s opening bid”. Now, if still there were doubts, this would definitively clear that Lynn and Karen make one of the most aggressive pair in the world, two tyrants who ruthlessly throttle any opposition. But what does happen when they lose the power and are forced to defend? “Leads and signals frequently deceptive”; in case letter they wrote it: they don’t reveal where are placed their cards, they prefer the risk of misunderstanding one another.