Jan van Cleeff, the Dutch journalist publisher of NewInBridge, published this interesting hand. In round 13 Vitas defeated Lavazza, the current Bermuda Bowl holders, by 16 to 0 IMPs. It basicly came down to this board: 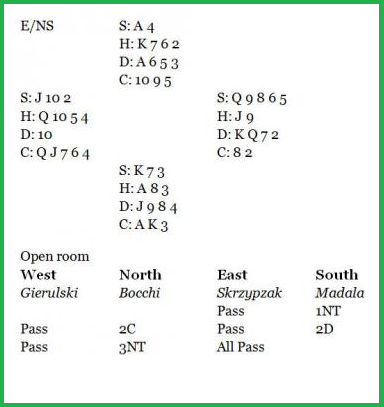 West led the ♥4 to the King in dummy. When declarer played a low diamond East rose with the King and continued with another heart. Agustin Madala won the Ace and ran the ♦J. East took the Queen and returned a club. Madala desperately played low, but West won the ♣J and two heart tricks: 3NT -1.

Lotan Fisher kicked off with a top club and switched to a low trump. The defence played three rounds of spades. Then declarer played a club, won by South. Two rounds of hearts followed and North returned a low diamond. Declarer played South for the Ace and therefore played low. When ♦J won the trick declarer went down four losing another two diamonds. NS +800. A nice pick-up, even green against red.

Paolo Enrico Garrisi‘s view: “This hand is quite interesting because it shows one of many reasons why the Total Trick Law doesn’t work. E-W thougth to be at safety level in 2S (eight trumps, eigth trick contract), but N-S were next to game; only next to, but had enough to trample gallant opponents. By the way: having E-W cashed four tricks only, and being sixteen the total tricks – eight spades and eight diamonds – the Law expectation was that N-S would made eleven or twelve tricks playing in diamonds. Have fun.”