In the article   devoted to the 1♣ opening , we pointed out how important is the old-fashioned punitive double when following opponent’s interference: the threat of a prompt penalty tones down West’s aggressiveness and “light” overcalls; the punitive double, we said, represents the body-guard of the Strong Club.

No such easy definition can be given to justify its usage following opponent’s overcall on a one level suit bid (but clubs); even Chiaradia, in the 1976 edition, advised adopting the sputnik double. In fact the double on one level overcall may appear odd, a sort of  nonconformist playing. Nevertheless, its alternative, i.e. the sputnik double, is not that obvious when we take into consideration its original functions. 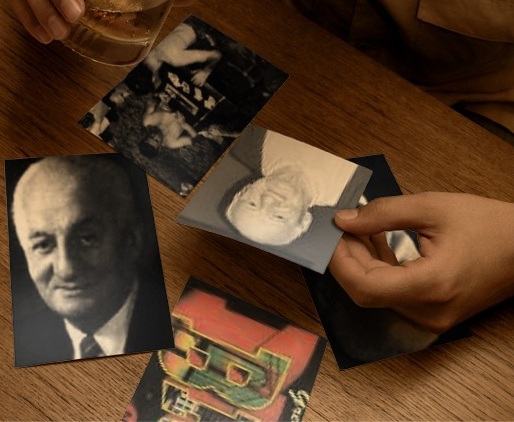 The idea occurred to Alvin Roth in 1957 and has been published the following year in the second edition of his  System [“Bridge is a partnership game”- 1958 Dutton & Co. New York]. Originally, it was called “negative double” or “informatory double”; on October of that year, the Soviet Union sent into orbit the first satellite, the Sputnik. A month later, the top American players met for a  tournament  at the Cavendish Club in New York: Alvin Roth, Tobias Stone, Oswald Jacoby, George Rapee, Samuel Stayman,  Howard Shenken. On that occasion,   Jacoby wittily named the new double “sputnik”, a term that all adopted enthusiastically. Thus the origin of the term on www.acbl.com  “In their own words”,  and in the Official Encyclopedia, 1st edition, 1964, pag 375.

On the other hand, in the 1994 edition of the Official Encyclopedia, i.e. the 5th, the idea of a non-penalty double is claimed to be the contribution of Lou Scharf, an otherwise unknown player from the Bronx, New York, as early as 1937. We mention out such vindication of mere historical  correctness, even though it might be somewhat irrelevant: within the clubs anything can be invented, but such novelties appear still rough and hardly fit to be used at  high class bridge level. By the way, Alvin Roth, born in 1914, was from the Bronx as well.

Let’s read the reasons that Alvin Roth gives, in his book (pag 96), to account for the new use of the double:
“The days of huge sets are gone. Today, bridge players tend not to overcall with broken suits…At the same time, the ability to penalize the opponents who take liberties is still there, but in another way”
A reflection is imperative on such remarks. It’s common thinking  that the aggressive bidding, that’s the entering the auction without HCP and with broken suits, is a feature of modern bridge;  it’s quite the opposite: the aggressiveness characterised the very first bridge games. The  weak jump overcall, for instance, has been invented by Oswald Jacoby in the Thirties; the weak jump response was due to Charles Van Vleck, New York, as early as the Twenties. The Forties and the Fifties, in turn, produced the Goren System, built on solidity and low aggressiveness; that is why Alvin Roth, in 1958, could claim that penalty double was obsolete, since by then no one dreamt of overcalling unless provided with a solid six-card suit or at least a well headed five-card one. Obviously, granting that Roth’s assumptions were right in 1958, nowadays, when flimsy overcalling has came back, the penalty double must at least be  discussed before being dismissed.

Let’s now see the other side of the Roth-Stone double: the chance, for the responder, of showing the four-card major suits.
In the first edition of Roth-Stone´s system [“Al Roth on bridge”, 1953 Melville Publishers, Washington, D.C.], the sputnik double did not exist yet. That system introduced another significant technique: the five card major opening – yes: the today most popular system is a creature of Alvin Roth. As a matter of fact, it was not entirely new: the Twenties’ old bridge had already the five-card major opening: it was replaced by Culbertson with his four-card openings (the so called “Approach Principle). Alvin Roth brought back the five-card major opening, completing it with modern structures. However, he realized soon that the opening in the minor would hide the four-card major,  thus making it difficult to find a 4-4 major fit. Four years later, In 1957, he solved the problem with the sputnik double.

Now let’s read the opinion of a today champion: in his book “Negative doubles”, Marty Bergen has written:
“Negative doubles are essential for finding four-four fits. Our ancestors had not such problems – they played four card majors. The modern approach to bridge, which embraces five-card majors, makes us work harder” [2000 Magnus Book, Stamford, Connecticut. Pag 1.].

Let us stop here. We shall soon examine the sputnik double and assess its advantages (or disadvantages), in respect to the punitive one; in the meantime, while admitting that the great majority of the best players have adopted the sputnik double, we feel entitled to draw the following conclusions:
– Any pair opening four-card major will gain a lesser benefit  from the sputnik double.
– Sputnik doubles are better employed against aggressive opponents, that is all of those who overcall with weak suits and low HCP count.
– Any pair using penalty double should have sound bidding: in order to use the punitive double, on must depend on partner’s strength.
The Neapolitan Club is a sound system, not aggressive; it uses four-card suit opening; today’s opponents are decidedly aggressive. Hence our  preference for the punitive double.