In the winning team played the Danes Stig Werdelin with Niels Foged; the other pair was by the Norwegian Nils Høeg with the Italian Paolo Enrico Garrisi. Høeg-Garrisi haven’t used the Chiaradia’s system, that’s Neapolitan Club; but their system, although in Sayc style, has some features of it, as the constructive weak-two openings, in the range from 7 to bad 13 points, and the solid one-level opening, which furthers the punitive doubles. The seam side of their system is the low aggressiveness.

Stig Werdelin is a Supreme Court Attorney, and a sheer champion at the table: he won more than thirty Danish championships; he placed 3rd with Denmark at 1961 European Championship, and 2nd at 1979’s; also won the bronze medal at 1984 World Team Olympiad.

Stig himself will comment a hand of the tourney; it was the very first one of the first round, played against Bernardo Biondo and Francesco Mazzadi, of the team Buccoliero. This hand deserves its comment because of the auction, a theoretical novelty on the Gazzilli convention, devised five years ago by Stig together with another partner, Sigurd Lauge Pedersen, Danish as well.

The only feasible contract was 2♦ by N-S, but only them out of the ten pairs found it; the others called at three-level or in wrong denominations, 2NT or 2♣. Their auction:

The auction of North shows 5+ spades, but not 12-14 HCPs with even distribution, because such a hand must be opened 1NT in our system. This means that I either have more than 14 HCPs, or a 6+ card suit, or uneven distribution with a least one side suit.

1NT is normal and non forcing: 6-9 points without support for spades.

2♣ is our preferred version of the “Gazzilli”, forcing one round . It shows either a normal opening with 5+ spades and 4+ clubs, or an at least invitational strong hand with spades, with or without clubs. The responder now focuses on his clubs, and would bid:

All other responses are natural and in principle deny support for clubs, although it is allowed to bid a very good red 6-card suit even if you also have support for clubs. To bid 2♥ or 2♦ shows 5 + in the suit, whereas 3♥ or 3♦ shows a 7-card suit and normally only 6-7 HCPs, because with more you normally prefer to bid in that suit directly over 1♠ instead of 1NT. Finally, 2♠ will normally show 2-4-4-3 distribution.

With the cards he had in this hand, South has no problem in bidding 2♦, promising 5+ diamonds and no support for clubs. He should also bid 2♦ with 5-5 in the red suits, even if his hearts might be better than his diamonds, and likewise if he has a doubleton in spades and 5 cards in a red suit.

North here has no reason to disturb 2♦ becoming the final contract. His support in diamonds should be sufficient to make the contract playable, and he knows that there is little or no chances for game in any of the black suits. The only possible game chance is 3NT, if responder should happen to have AJxxx(x) in diamonds and a stopper in hearts, but even then North has no sure or meaningful way to reach that spot.

As regards openers’ continuation after responders’ answer to the “Gazzilli” 2♣, it is clear to stop in 3♣ all the time that responder has shown support for clubs, and opener just have the “normal” weak hand with 5-4 in black suits. Otherwise it follows “natural” lines, which include that bidding of a new suit is natural showing the strong variety, but not necessarily game-forcing.

Perhaps, one of the greatest advantages of this system is in the numerous cases when “Gazzilli” is not used after bidding has started 1MA – 1NT. Here the two-bid in a red suit denies a maximum hand, whereas a jump to three-level in a new suit is agreed as game forcing with at least 5-5 in the bid suits. 2NT is specially agreed to show invite+ with a 6-card major suit in a hand that would possibly be willing to play in another game than the major. If opener is only interested to play in no-trumps, he must either go over 2♣, or bid 3NT right away if he feels strong enough for this. 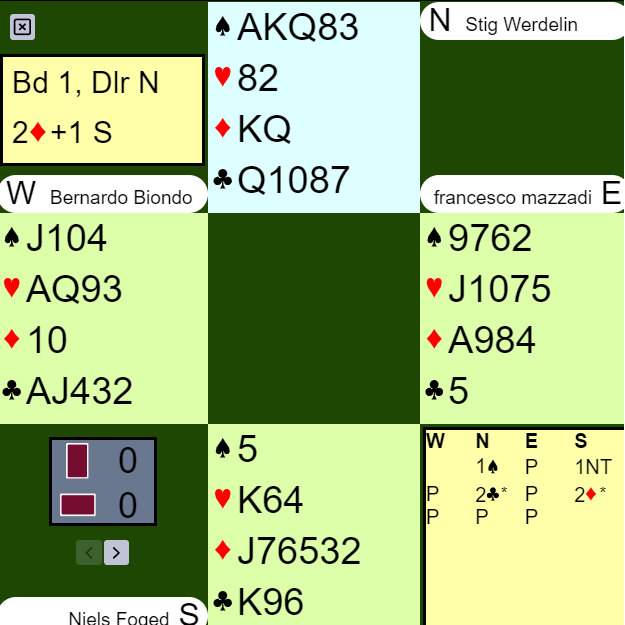