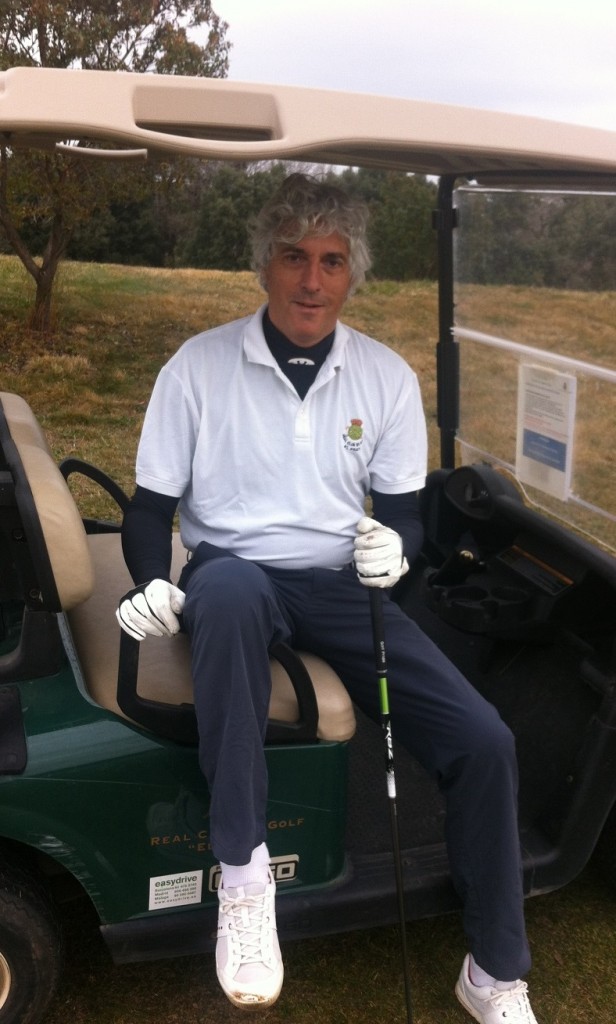 We have got Norberto Bocchi coming from the victory in Montegrotto International Team (with M.T. Lavazza, Ferraro, Duboin, Sementa), and just before leaving for Saint Louis (MO), to play the Vanderbilt Trophy with Madala and Mustafa Cem Tokay.

Between congratulations and good luck there had been only time for three bridge questions. We talked about the Prudence.

A) Interference from West: The Recklessness of Forquet. Como, 1958 Bermuda Bowl, first hand of the match Italy-USA. Love all, South opened 1♥; Pietro Forquet in West overcalled 1♠ with:

whereas B. Jay Becker, the other table’s West, had passed. This is not exactly a “lead directing” style, and, what’s more, the interference of Forquet was hazardous even because the opponents were Tobias Stone and Alvin Roth with their very sound system: opening from 14 HCPs and unlimited strength (as today Fantoni-Nunes).

I ask you, Norberto: wasn’t Forquet too reckless with that poor suit and against such a sound Opener? But also I have to ask you: how much really do matter the heads in the overcalling suit?

Norberto Bocchi: I would say that, for the bridge played in those times, this 1♠ overcall was very aggressive; but isn’t the case, maybe, that Forquet was forerunner in 1958?

About holding heads in the interference suit I think – and I hold that it’s an opinion shared by many strong players – that the one level overcall could be done, at limit, even without heads in the suit, because the advantages of overcalling sometimes are much greater than the risk to suggest a wrong lead.

But I admit that there are exaggerations; I remember an overcall by Antonio Sementa, he had ♠Qxxxxx ♥Jxxx ♦xx ♣x and was vulnerable: on 1♣ opening, Sementa interfered by 1♠. But also I remember that Alfredo Versace upheld this kind of overcall saying that it was almost due, whereas I and others were bewildered. As you can see, all was lacking in that hand: the heads in the overcalling suit, the points, and the advantage love to vulnerable!

B) East’s Intervention: The Prudence of Mike Lawrence. In his “The complete book on overcall in Contract Bridge” (1979 Hardy, Hawthorne CA), Mike Lawrence bore this example: South opened 1♥ in a standard like system, West passed, North responded 1♠; sitting East, you hold:

What would you call? Lawrence recommended to pass; 2♦ could work in a pair tourney, he wrote, but it would be dreadfully exaggerated in IMP. He explained: you have the worst cards you could have in the response’s suit, three deuces; you have non-heads honours in opening suit; the opponents have already told their major suits, therefore there is little to gain, tactically.

Do you agree with him?

Norberto Bocchi: Technically, Lawrence is right: with a 5332 without a biddable major, the three douces in the opening suit don’t promise well: there’s the risk that the partner held a ten of point and you could make 3NT but… in this specific hand I agree with Lawrence that it’s better to pass.

The best alternative is 1NT even without spade stopper: if I had to enter, it would do it for the best earnings. If I bid 2♦ instead, my partner might pass and we might have had a cool 3NT contract without any chance to call it.

In which of these sins do you fall more often, and what does more tempt you?

Norberto Bocchi:  I might get into mistakes only playing impulsively, none of these deadly vices really tempts me… however, let’s analyze the Musumeci’s list.

1) Bidding without values. It’s highly subjective, it depends on pair’s agreements and on how they think bridge: there are pairs less or more aggressive. In brief, it’s a matter of style.

2) System violations. A good pair rarely violates the system; if the worst comes to the worst a player can make an “upgrade”, for example opening 1NT with good 14 points; or when the pre-emptive openings are allowed by many hands, thus rarely falling in violation. All the rest might exists, but it would be the classic own goal.

3) Unilateral actions. Sometimes the unilateral initiatives come from good players’ intuitions, thus in this case the deadly vice is transformed in virtue, except when these initiatives become too much frequent.

4) No-win declarer play; 5) No-win defensive play. A true good Player – with the case P – plays bridge not to show to be good but with the purpose to not get wrong; that is, he always tries to make the right move even if it could appear odd; he doesn’t fear to make a poor figure but always try to make the contract. You can play even passively, but most times it might be winning bridge.

6) Impulsive play. It’s a vice more of players who feel sure rather than the ones who are perplexed. It’s sure that this isn’t the kind of mistake which happens to the very slow player, but also it’s matter of pros and cons: the fast player tires much less than the slow one; at the end of a bridge day, with many hands and great stress, the crispness of the fast player is far greater than the slow one’s.

7) Mechanical errors (pulling the wrong card, revoking, etc.). The lack of concentration or the weariness push to such kind of mistakes, at high level they have to be avoided: that’s which makes the difference between the champion and the not-champion.

(Photo: Norberto Bocchi kindly did up as golfer – he’s a good player − for the Laura Camponeschi article published on the paper magazine “Leggo a Tenerife”. This is the magazine of the Italian community in Canary Islands; that article just treated of bridge and golf)