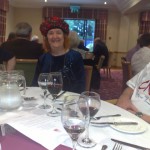 The Camrose Trophy is the oldest international event in Contract Bridge. The idea of an international competition between the countries of the British Isles was born in 1936. By this time Scotland, Ireland, Northern Ireland and Wales each had their own bridge federation. The English Bridge Union was founded in 1936, the same year that Lord Camrose donated his Trophy.

The first matches were played in 1937. Each of the five countries played a 100-board match against each of the others; the ten matches were spread over the calendar year, averaging one per month. The 1937 and 1938 series were won comfortably by England, but the 1939 series was never completed because of the outbreak of the Second World War. The Camrose was next played in 1946. The 1948 series was squashed into the early part of the year so that matches could be played during the winter months: since then it has followed the bridge calendar, with matches played between December and March.

In 1951 Ireland withdrew for political reasons, and the format changed. The four remaining teams played head-to-head matches over three weekends, till Ireland rejoined in 1999. Now five weekends were required, with increased commitment of time and money, and in 2005 the format was changed: all five teams came together over two weekends in January and March. This meant that teams had one bye each weekend, and a sixth team, from the nation hosting the second weekend, was added to avoid boredom.

Other changes were in the form of scoring – the original 2 points for a win, one for a draw has evolved into the European 25VP scale; and the introduction of Bridgerama, then Vu-Graph, and now complete coverage on BBO. Screens were introduced only recently. Each change has seen opposition from some players who still hanker after the weekend match which was a more relaxed social occasion.

As the largest country, England has dominated the Camrose. It won every series till 1963, and there were mutterings about changing the format. But in Scotland Albert Benjamin had other ideas: Scotland beat England for the first time in 1963 and went on to win the series. In the next 16 seasons Scotland won the Trophy 9 times, and tied with England twice. Scotland has only won three times since these Glory Days, but when Ireland rejoined they became a force to be reckoned with; their European Silver medallists have won the Trophy 5 times. Neither Wales nor Northern Ireland has ever won. The current series is the 68th. Till now England have won 48; Scotland 12; and Ireland 5; and Scotland and England have shared the Trophy twice.

This year it is Wales’ turn to field two teams, but the favourites must be England again, with Ireland the only realistic challenger. Which does not mean the other countries cannot hope!

Liz McGowan is Scotland’s only World and European Grand Master, having won two Women’s European Championships, and the inaugural World Mixed Teams in Rhodes with the Icelandic men. She has been less successful since Scotland was separated from Great Britain in 2000. She lives in Edinburgh, where she writes a daily column for ‘The Scotsman’ newspaper, and frequently commentates on BBO as Cutty Sark (which means ‘short skirt’; the name of the young attractive witch in Robert Burns’ poem ‘Tam o’ Shanter’ – she fears that a picture tells another story)