Reading The Bridge World Magazine with Norberto Bocchi. Guy Coutanche published in Bridge World of June 2011 an hand of thirty years ago: Matchpoint tourney, all Vuln

East won by ace and returned ♠4, taken by king. The declarer was a very young Norberto Bocchi; the journalist of Bridge World entitled the article as “That Bocchi Boy”. That boy made twelve tricks where didn’t look clear how to make ten. We are going to walk our intermediate readers through this wonderful hand; the way how Bocchi played will be guide for us to explain and for readers to understand it. Norberto Bocchi is next to us, now; his comment will follow at the end.

The ♣K must be onside, or the contract is in jeopardy. The auction says East has it, probably fourth, at least third; in every case there is needing of two entries in Dummy. The Declarer at trick three played the king of diamond and overtook it by Dummy’s ace: why this coup?

East, without a five card major, entered between two active bidders, that is between two opponents of still unlimited strength: he must be short in the sure real opponent’s suit, diamond. It is possible to sacrifice a Declarer’s diamond honour and, after, to finesse West’s 10-8 by Q-9, so entering twice in dummy. Since now, note that East should have a 4-4-1-4.

At this moment we have nine tricks; could be ten because the heart king is in East too, but we haven’t the third entry to finesse it.

At trick three (♦A over the king), East dropped the ten; the entries in diamond are now three: the J♦ also can be overtaken, later finessing East’s ♦8-6 by Dummy’s 9-7. We could finesse ♥K, now, gathering ten tricks; but, having East a 4-4-1-4, a squeeze is possible if he also holds ten and nine of hearts.

Our intermediate readers don’t know the squeeze technique, or know little of it, so needs to say something about the matter.

The squeeze is realized when one player has to hold two suits (he is “busy”), whereas the squeezing side parts in two hands the same overall number of cards, in the menaces, plus a free winner: the squeeze card. A useless card (“idle”) is opposite to the squeeze card, so when the latter is played, the former can be harmless discarded; the busy player, instead, hasn’t an idle card and must  part with a guard.

East is that victim; his double revealed his hand – after thirty years, probably he’s still coursing it; but who could know that the slender boy would have become one of greatest player of all time?

After three round of clubs Bocchi played diamond, finessing West’s 8-6: 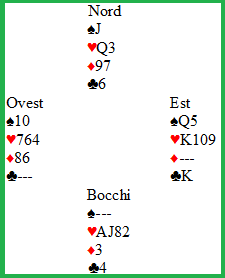 North-South had two losers, but East was too busy. He could still discard the ♠5 on the first diamond, but on the second one, the squeezing card, he had to resign: if he discard an heart, after the impasse to king the Declarer wins two tricks by length in that suit; if he discards the ♠Q or the ♣K, the menace ♠J or ♣6 becomes not only winner but even a new squeezing card.

This scheme is called “Progressive Squeeze”. 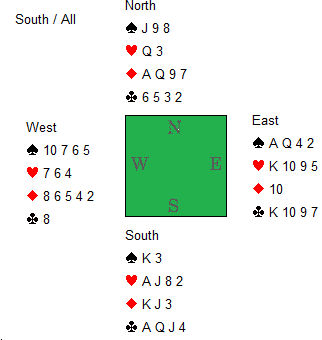 Last (or “all winners but the last”): state in which the squeezing side wins all the tricks but one.

In the diagram at trick eight, the moment of diamond finesse, the ♣A already was played. Let’s suppose now – well, there is still something else to say on this hand – let’s suppose now that we play the finesse before to draw the ♣A. The diagram would become as follow: 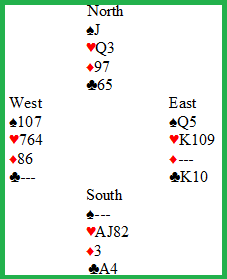 East discards the ♠5 on the first diamond and he’s squeezed on the second one, exactly as above, but there is a new: South is blocking himself by his club ace. East discards ♣10, careless of his king; it will drop on the ace, later, but South has to concede the last heart. The ♣A unblocking is called “Vienna Coup”, and consists substantially in the transfer of a menace: meanwhile the ♣A is held on to, the club menace is the 4, in South; by the unblocking the club menace becomes the 6, in North, and South’s ♣4 becomes idle card.

Thirty years ago – The Bridge World magazine reports – that boy unblocked twice a suit to have as many entries as he needed, then made a Vienna Coup in order to establish a Progressive Squeeze.

“I played well, yes, but also I was luck. The key card was the ♦10; the progressive squeeze was just in consequence of that guiltlessly stiff card. I hold my only merit was to think to the chance of dropping that card: this can be the difference between an expert and a non professional player.”