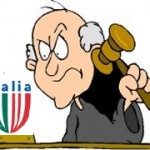 From green tables of Amateur Sports Association Bridge Bologna to the chair of a court. It is the final stage of the Italian Clubs Championship: In the open teams vie for supremacy Angelini (Rome), Varese, Allegra (Lavazza – Turin) and Villa Fabbriche.  As the caliber of the participants – Bocchi, Brogeland, Duboin, Fantoni, Ferraro, Helgemo, Helness, Madala, Nunes, Sementa – the event has international interest and the whole world looks  (in vugraph) at what is happening in Bologna. But these Championships hit the headlines not just for the game.

The team of Francesco Angelini will be disqualified because the three Norwegian players, messrs Brogeland, Helgemo, and Helness, do not have the necessary residential requirements for them to participate in the Championship of 2010. The team Varese protested and won the appeal: The results had been adjusted with the Varese Team being awarded 2nd place. But Mr Francesco Angelini now has appealed to the National Court of Arbitration for Sport (CONI – Italian Olympic Committee)  against the Italian Bridge Federation (FIGB).

While waiting to know the decisions of the National Court of Arbitration for Sport of CONI, we present here a brief summary of the facts and opinions.

September, 23 2010 –  Starting  the final phase of the Italian Clubs Championship. In the first meeting challenge Angelini and Varese. For the Roman team takes the field the pair Helness –  Helgemo. The meeting begins with about half an hour late because  Giancarlo Astori  (Varese) is taken ill and hospitalized for tests. In the evening match plays the third of Norwegian,  Boye Brogeland, paired with the sponsor Francesco Angelini.

After the first round of competition the Varese’s Team submitted written request of clarification about the participation of  Norwegian players with Angelini’s Team.  They refer to  Article  22 of   FIGB Regulation  approved by the CONI National Government  by resolution 17 of 01.19.2007. (read more)

The complaint was submitted to the CNG (National Tournament Committee) who declined to make an immediate ruling, and asked for clarification from the CONI (Italian Olympic Committee).

The CNG has therefore  not immediately decided on the complaint but deferred the decision to a higher authority.

The competition goes on, the Norwegians continue to play.

September, 25 2010 –  The story  attracts the interest of the international press. Bridgetopics.com (Bridge News Agency), the online magazine  by Jan van Cleeff and Eric Rodwell,  will follow the evolution of the curious story. (read more)

September, 26 2010 –  Angelini with the Norwegians in tow, reaches the final where they loose to the Allegra Team (Lavazza)  of Turin, the championships came to an end in the normal fashion with the awards ceremony and the ritual photo shoot. But an annotation is posted on the official website of FIGB (Bridge Italian Federation) about the Italian Club’s Team Championships just played  in Bologna: “The National Tournament Committee (CNG) has received a complaint during the Championships, the result of which is still pending, as is the outcome of the match.”

September, 28 2010 – The CNG publishes its request of clarification to CONI.

Mr. Paolo Uggeri, Varese team delegated,  stated that no formal communication has occurred between them, the Varese team, and the Italian Federation, adding “The silence by the authorities is like thunder, and that the President will be held accountable over the issue, including their failure to come to a timely solution, it has gone on long enough”.

November, 19 2010 – Neapolitan Club and BridgeTopics.com, the bridge news agency, have requested, on more than one occasion, clarification from The Italian Federation. Finally something has come in. On November 19, Mr. Giovanni Maci (General Secretary of Italian Federation), writes:  “As you certainly know – you can verify yourself on the site FIGB www.federbridge.it (competitions / championships / leagues Company) – the outcome of the Championship play-off for Open Teams is still sub judice. The Federation has no opinion about the decision, which is entrusted to the competent authority, the CNG (National Tournament Committee), which has not expressed its view yet. I recall you, however, that the statement of c.n.g. (National Tournament Committee) is not public.”.

November, 30 2010 – The decision regarding the final of Italian Club Championships is at last determined  by the CNG (National Tournament Commettee) after the appeal from the Varese Team. The complaint is upheld, therefore the team of Francesco Angelini is disqualified. The three Norwegian players who played in the team, messrs Brogeland, Helgemo, and Helness did not have the necessary residential requirements for them to participate in the Championship of 2010.

The results have now been adjusted with the Varese Team being awarded 2nd place. Thus there will not be a rerun of the final between the Allegra Team (Lavazza) and that of Varese. (read more)

Is The case  solved? No, it isn’t. The S.S.D. Angelini has now appealed against the FIGB at the National Court of Arbitration for Sport CONI.

June, 14 2011 – Mr Angelini, however, has submitted a formal complaint to the National Court of Arbitration for Sport of CONI (Italian Olympic Committee). The first hearing was held on June 14, 2011.  The Court has previously made an attempt at conciliation.  Mr Angelini  proposed  a change in federal rules  that  equates  the Community or European players with Italian citizens. Italian Federation (FIGB) now has until next July 15 to provide its response to the Court. (read more)

In October 2010, Maria Teresa Lavazza declared: I think it is  absurd to let three foreigners play. It seems to me it is against the rules.  Let’s see how it develops. It doesn’t matter who won or lost. I insist on the irregularity of the presence of three foreigner players in the Club Team Italian Championships. (read full interviw)

In November, during  an interview with us, Giorgio Duboin (Allegra Team – Lavazza) stated: “Sure. We are also awaiting the decision of the CNG (National Tournament Committee) and maybe we will have to play the final again.”And when asked if he would willingly play again, his reply was unequivicol:  “Why should not I do so? If we won against a team that did not have the right to play it is correct to play against those who were entitled. We must always remember that we are talking about sport. Sometimes I think people forget the basic principles of sport. The results must be on the basis of the weapons at hand. Yes, I will willingly play the final again.” (read full interview)

Fulvio Fantoni (Angelini Team) stated in a previous interview with Neopolitan Club: “If the Varese Team thinks that there were irregularities, they have a perfect right to make a complaint. On our part, before including three Norwegians in the lineup, we made our verifications with requests both to the Federation and to Olympic Organization. Once the replies were obtained, we followed the indications given to the letter. In fact the registration of the team was accepted. I repeat, on our part, we made sure beforehand that it was possible to make this registration. To be precise, they replied that we could register three Norwegians, but only two could play at the same time, or in the same session. And we followed the indications received.” (read full interview)

Useful for the reconstruction of the facts and very clear, finally, the statements of Federco Primavera (Angelini team): “A.S. Angelini, to avoid surprises and any doubts, asked the Federation before the players left Rome and Norway for permission to play the three Norwegian players, Helgemo, Helness and Brogeland. From what I understand, the Federation responded that they could play as long as they play only two of the three Norwegians at any one time. A.S. Angelini at this point claimed the high costs of hiring the Norwegians and the team has always played with no more than two Norwegians at the table (so much so that Fantoni and Nunes did not miss a single turn). Then when the complaint of Varese arose and incredibly the suspension was imposed. I can not understand how one can allow players to travel from Norway, allow them to play, and then disqualify the team. The thing that saddens me most about this was that the protest only arose after the event, when we were actually playing against Lavazza, at the time,we were 60 imps ahead, with two sessions to go. Lavazza, as you well know , then went on to win by only one Matchpoint!”. (read more)

2 Replies to “That Awful Mess – Angelini’s disqualification: facts and opinions”