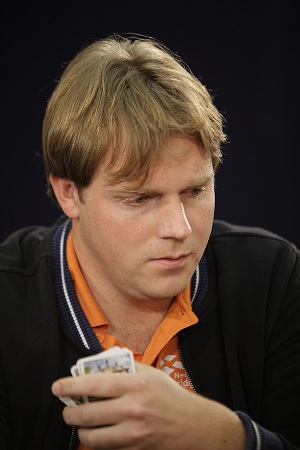 Last October Sjoert Brink (31) and Bas Drijver (32) won the Bermuda Bowl in their home country The Netherlands, where they generally are considered as the number one pair. Two weeks ago Brink and Drijver were hired by Francesco Angelini to play the Italian Team Championships together with superstars Lorenzo Lauria and Alfredo Versace. The team finished fourth. Laura Camponeschi, BTC’s correspondent for Italy and editor of Neapolitan Club, grabbed the opportunity to ask some questions to Sjoert Brink.

Sjoert, as to Angelini, Bas and you have signed up with Angelini. This is the first time that a Dutch pair professionally plays in Italy. How come? What is the deal?

This March Alfredo and Lorenzo asked us at the Memphis NABC if we were interested to play the Italian championships. For me, it is a dream to play for Angelini. Therefore Bas and I had no difficulties to say yes. Moreover, in November we will play the European Champions’ Cup in the same team as well.

Hans Melchers, the biggest Dutch sponsor, announced the launch of his “Onstein Aces”, named after the Onstein castle where lives. Melchers must have had in mind the “Dallas Aces”, who successfully challenged the Italian Blue Team in the sixties and seventies. The Onstein Aces will last two years, and with the focus on the next World Championships in Bali 2013. Can you tell us something more about the plan of mr. Melchers? What is your opinion about it?

Hans’ goal is that our country wins again the Bermuda Bowl in Bali. To accomplish that, he organises practise matches against strong opponents. Basicly we did the same on our road to the Bermuda Bowl in Veldhoven. So no dramatic change as to preparations. We stay to play on his team ‘t Onstein in our national competition and we pay regular visits to his club on Friday nights.

Next month the European Team Championships are held in Dublin. Which teams are favorite for high finishes? Could you give us your forecast of the first six teams, which qualify for the World Championships in Bali?

Italy has by far the most powerful team. Monaco is also strong, and for the rest we have usual suspects, like Israel, France, Poland, Russia,Germany, Sweden and Iceland. Bulgaria and England are dangerous outsiders. My personal dark horse is Denmark. My Top 6 (in random order): The Netherlands, Italy, Monaco, Israel, Denmark and Sweden.

Finally the EBL permitted Zimmermann’s team represent Monaco in these European Championships. What do you think?

I think it is a very good idea that the strongest European players can play in the European championships. Winning these championships when Zimmermann is also playing is always better than winning when he isn’t playing.

Going back to your great triumph in the 2011 Bermuda Bowl of Veldhoven, which of course was a happy moment for you. The Italian champion Norberto Bocchi granted us a long interview on these championships. He went through the semi-finals where The Netherlands beat Italy. Bocchi complimented your team and acknowledged his opponents’ expertise. However, he analysed a few hands from that match and argued that some of them were lucky. I am sure you read that interview. How do you feel and do you have a message for Norberto?

In 2004 The Netherlands played the final of the Olympiad in Istanbul against Italy. We analysed the match and were convinced that Italy was lucky to win that final . So let’s call it even.

Let me tell you about one hand from Veldhoven (the cold 6S) where Norberto thought we were lucky: 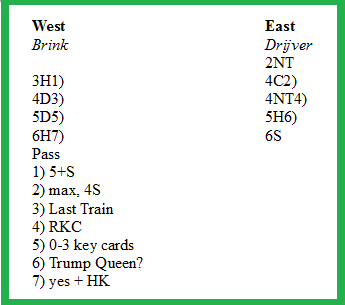 Bas and I don’t have a system where we can show 5S and 4H over 2NT. With my eight points I didn’t want to run the risk going down in 3NT, where 4M was a claimer. I decided to ask if he had three spades. If he had two,  we for sure had a 3-2 fit in a minor, hopefully enough for a stopper. If I had bid Stayman in stead, a 3NT response still could imply a 2-2 fit in one of the minors. That was my reason for the transfer.

Lucky? The funny part was that it was even easier if i would have bid 3C Stayman. Bas would respond 3S, and i would bid 4D (slam try spades). So we would always bid this cold slam. I like Norberto as a person and in my eyes he is one of the best bridge players in the world. I hope I can play lot of battles against him, and I love it when he calls me lucky.

Let’s change the subject, an easier question now. Who do you think are the two strongest pairs in the world and why? If you could choose two pairs for your team, who would you pick?

There are too many strong partnerships too pick only two. I think that three Italian pairs (including Fantunes), Meckwell, Muller-De Wijs, Cheek-Grue and Levin-Weinstein are really strong. Balicki-Zmudzinski are for me angstgegners, they always do so well against me. But after the Italian Championships I can add all the Italian pairs I played against as angstgegners. Because winning the Bermuda Bowl was so big for me, the two other Dutch pairs Muller–De Wijs and Van Prooijen–Verhees are the picks for my team.

Sjoert, before we move on to bridge technique, I would like to ask you a personal question, if you do not mind. Do you have a family life?

Definately. I have two kids, my son Daan (7 years) and my daughter Froukje (3 years). They are the best what ever happened to me. At the moment I am single.

Bridge aside, what are you interested in, hobbies, sports, books?

I like to play tennis and with my son I play soccer. I have an appreciation of good wine. My favourite books are biographys on sportsmen (Ronny O’sullivan, Zlatan, Louis van Gaal, etcetera). And I love to read books to my daughter. That makes her so happy.

How does your daily routine look like. Do you wake up in the morning and study the system, bid with partner, read books (on bridge) or do you just play when there is a competition? And in between competitions, do you play online?

Bas and I seldom play online (playing live is so much better). Once in a while we bid some hands by email (made by the trainer). We have training sessions with the national selection were we discuss the hands bid, thus improving our system. And sometimes we bid hands against the other pairs. Once a week we play a clubgame at ‘t Onstein.

A bridge question. What kind of shape and strenght do you need overcalling a strong club? Culbertson strongly advised not to overcall on second position with a 5332 distribution, but when the responder of the strong clubber bids a negative 1D he was much in favour to bid whenever possible. What is your opinion?

In the system you play with Bas Drijver there is written: “after intervention we play a lot of transfers”. The transfer shelters the strong hand from the lead, but it opens the way for lead directing doubles by the person in fourth psotion. How often does that happen? Do you have countermeasures against it?

Although transfers also have the advantage that the overcaller is on lead, the reason we play transfers is just to have more space. Our whole system is based on space. Example:

Bas and I play

Reason is that we can show below game if we have a good hand or not. Another simple thing:

Everybody plays 2D here as a cue bid. Bas and me, we like space. We figured out that a heart raise was 9:1 favourite to a non forcing club bid. Therefor we reversed the meaning of 2C and 2D. So now 2C = a heart raise (partner can bid 2D with an okay hand), and 2D = clubs.

Last question. On third hand your system allows you to open ultra light in a major with four cards only. Apperantly you follow the same principles as the famous Alvin Roth in his 5crd Major system: opening on four cards in third position. Which are advantages and drawbacks of it?

We noticed that making action in third chair is a winning strategy in bridge. Due to its preemptive element it makes life more difficult to the opponents.

Co-produced by BridgeTopics.com and Neapolitan Club