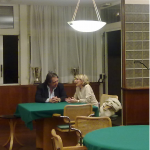 Silvio Sbarigia is a pharmacist; he was born in Rome and lives there. He has won the European championship in 1975, runner up at 1974’s and at Olympic games of 1976. His bridge problems aren’t difficult; just we need to think on a plan and to avoid the instinctive playing. This quiz is titled: ” When the prey becomes hunter”. This hand has been actually played, but the cultured reader will recognize in it one of the safety playing described by Terence Reese and Roger Trezel in their book “Safety Plays in Bridge” (1976 Ward Lock, 1990 Gollancz, London).

Sometimes the high cards suggest a such obvious playing plan that we execute at once, just to discover – just to discover after – that the right reading of all the cards would have advised something else.

The Plan: there are three tricks by diamond and three by club, and one by hearth, already done; all the remnant is matter of suit playing: how to lose only one spade, even against the 4-1 break, lacking of Q-10. Who has read the book knows what to do, but who didn’t still has a chance to make if he will put the question in the right form: it is not “how to catch the queen”, but “how to prevent the queen to catch our knave”.

First it needs to take notice of the little tenace A-8 in dummy; then it needs an anti-instinctive move: to start playing the king, so destroying what looked the main tenace. But it must remembered that K-J is trap for the queen, not shelter for the knave, and we are trying to save the latter, not to capture the former. After the king, it has to be played little to A-8, covering the 10 or the queen, or finessing. If West discards, let’s draw the ace and move little towards J-9 and  through East’s Q-10.

It is often said that “Bridge is a game of intelligence”; this common believe is even true, but is misleading as well. An intelligent player could solve the problem of this hand in less than one minute, but cannot solve all the technical problems of any hand, if he has never studied, in the few minutes he has. Bridge, Mathematics, Philosophy, any intellectual task is matter of knowledge before the intelligence; the intelligence without the knowledge is as a ship with great helixes but powerless engine.