Silvio Sbarigia is a pharmacist; he was born in Rome and lives there. He has won the European championship in 1975, runner up at 1974’s and at Olympic games of 1976. His bridge problems aren’t difficult; just we need to think on a plan and to avoid the instinctive playing. This quiz is titled  “The Key Card”. Key Card is called the card that, seemingly featureless, is in contrast the cornerstone of an entire playing plan. Such card is almost never an active one – it rarely has chances to win a trick – and is worth only for the place it lays, not necessarily in our side.

Contract: 4♠. West leads ♥A, cashes the king too and follows the suit.

There are four tricks in club, one in diamond, none in heart; so the contract takes us to make five tricks in trump, thus it needs a successful finesse in spades.

Thinking upon the playing plan (all our readers always make the playing plan forthwith after the lead, still before to touch the card from Dummy), it becomes clear that the problem to solve is: how could we catch the East’s spade king if the trumps broke 4-1? There is only one entry to Dummy indeed, the ♣K, whereas we need to move from dummy all the three rounds of spades; the queen can hold the lead, but the seven cannot do it. It has to be noted, nevertheless, that the ♠7 is part of a row that begins by the Ace and is broken only by the king – the head to be hunted – and the eight. If the eight were in East’s hands, along the king, nothing would be done; but if it were in West instead, falling in the first round of the suit, all we need is to hold on the six, promoting ♠7 to a master card.

Ruff the third round of hearts by nine (not by six); play club to Dummy’s king and start the first round of spade by queen, discarding the ten (not the six). The eight – that’s the Key Card to watch – the eight falls from West, and the ♠7 is now able to retain the lead of the second round, allowing another round of finesse. 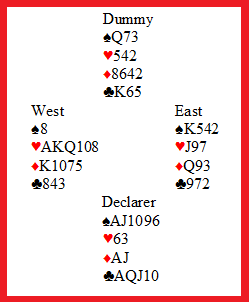