Silvio Sbarigia is a pharmacist; he was born in Rome and lives there. He has won the European championship in 1975, runner up at 1974’s and at Olympic games of 1976. His bridge problems aren’t difficult; just we need to think on a plan and to avoid the instinctive playing. The title of this quiz is: “Holding the rock”.  The safe climbing position on the rock is X shaped: three limbs are holding and the fourth is searching an higher hold. If one hold gives way, two at least are still withstanding.

There are ten tricks. Trumps are all mastercards, so it’s possible to postpone spades clearing, finding the eleventh trick ruffing the fourth heart; the queen finesse has lower percentage of success. Timing accuracy needs: every card – every limb in the wall – has to be moved in the proper moment to keeping up the control of equilibrium. First, duck the lead; West continues with diamond, we take and play ♥A (stiff queen sounding for), then little club to Dummy’s ace and little heart toward the ♥K. If the ♥Q still withstands, play heart again, giving the hand but after ensuring the ruff by high card of the fourth hearth.

East could have started with singleton hearth; that’s why we move from Dummy the second round of hearth. He ruffs – the mountaineering’s foot slips – but harmlessly: East just wins what he already owned. But – but! – if we should have won at once the lead, prematurely wasting our safety hold, that is the diamond control, after the ruff East can give the hand to partner via diamond, then gaining another ruff and our fall. 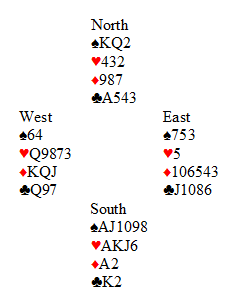