Silvio Sbarigia is a pharmacist; he was born in Rome and lives there. He has won the European championship in 1975, runner up at 1974’s and at Olympic games of 1976. His bridge problems aren’t difficult; just we need to think on a plan and to avoid the instinctive playing. The title of this quiz is “Freedom of Hills”*. Climbing a peak, there is sometimes a good rest for one foot next to us, but not for the other foot, nor the ledge is wide enough for both feet, so we have to search farther…

There are ten tricks: one spade, four hearts, three diamonds, and two clubs. We then need two tricks more, or, in climbing language, we need two footholds: one is next, sound and safe, that is diamond ruff. The other one – ♣Q finesse – is next too, but unsafe: there are 50% of probabilities to fall; is there a better grip? Yes, and not so far, after all.

Draw ace and king of clubs, then diamond, discarding the remaining two clubs. Ruff now the third club, and that’s the comfortable protrusion in the rock that can support both feet: one trick by ruff – but club, not diamond! – and the twelfth trick will come from the fourth, established club. Play now the ♠A, discarding the diamond, ruff spade, clear trumps and you’re on the peak.

*The title of this article, “Freedom of Hills”, is inspired to the homonymous fine book on trekking and climbing edited by The Mountaineers of Seattle: 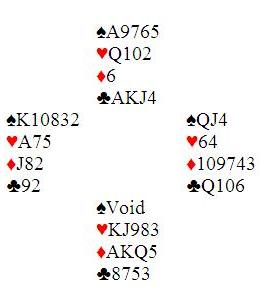