Silvio Sbarigia is a pharmacist; he was born in Rome and lives there. He has won the European championship in 1975, runner up at 1974’s and at Olympic games of 1976. His bridge problems aren’t difficult; just we need to think on a plan and to avoid the instinctive playing. Solution will be published into fews days.  As usual, mind the title and … Have fun!

In the quiz 6th, “the rich merchant”, we treated of the Morton’s Fork: it is a coup where the defender has to win immediately a trick, promoting an honour, because, ducking, the loser will vanish.

The name comes from the Cardinal Morton. From official Encyclopedia, pag. 300:

“Cardinal Morton, Chancellor under King Henry VII, habitually extracted money from wealthy London merchants for the royal treasury. His approach was that if the merchants lived ostentatiously, it was obvious that they had sufficient income to spare some for the king. Alternatively, if they lived frugally, they must be saving substantially and could therefore afford to contribute to the king’s coffers. In either case, they were impaled on Morton’s Fork”

The Italian inland revenue Service works as the Cardinal Morton, but with twice efficiency: they extract the money from people, and after they come back to the same victims and press them again. In this quiz, the Declarer acts as an Italian taxes collector. 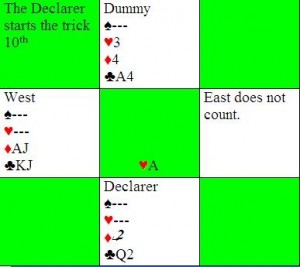 By the auction we mark West as ♣K and ♦A’s holder. Take the lead in dummy and clear opponent’s trumps. Move now the 2 from ♦K2 toward Q43: so starts the Morton’s Fork. West has to duck, but he feels sure because aren’t way for the losing diamond to vanish. The Declarer now plays the heart king, then exhausts the spades, discarding a diamond and a club from Dummy, as you can see in the diagram. The ♥A now forces West to pay again: if he holds up the club King’s guard, he has to dry the ♦A and the declarer will throw him in by a diamond, forcing him to play club under the king.