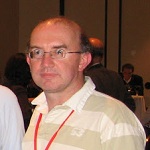 Scotland versus Neapolitan Club Staff. Monday 25th in BBO, 20,30 CET (19,30 GMT). This is the second challenge between the Scottish Team which is playing the British Home International Series (also called Camrose Trophy, Dublin 1-3 March), and a team of Neapolitan Club Staff. In the first match, played in December 2012, the Scotland prevailed.

Paul Gipson has sent us a presentation of his team.

As a partnership Alex Wilkinson and Philip Stephens made their Open international début in January but it was only a couple of years ago that they were playing together for the junior team. Despite his tender years Alex has played numerous times for the Open team, making his first appearance in 2006 playing with his father. Since January Philip has received his doctorate (to be known as ‘Dr Phil’ henceforward), an achievement Alex hopes to emulate later this year, if not sooner.

Alex and Phil play a modern 2/1 style including transfer responses to a short one club opener. They rarely miss a 30% slam but are trying hard to raise this percentage.

Paul Barton and Brian Spears are a relatively new partnership and will be making their international début as a pair. Brian has played for the team over many years with various partners and was one of Scotland’s Commonwealth Nations gold-medal winning team in 2010, but this will be Paul’s first international cap.. Last month they won the Winter Foursomes, Scotland’s premier weekend event, and the Scottish Cup in 2010/11, albeit with different partners.

This is the team’s fourth practice match on BBO this month, having narrowly beaten the BBO Forums and AZS Wroclaw, and lost a close match to Israel. The team is grateful to all those who have donated time to help them prepare for the Home Internationals.

In the Neapolitan Club Staff are playing Fabio Colasante and Paolo Enrico Garrisi, me. Our system is the 1966’s integral Neapolitan Club by the great theorist and Blue Team’s player Eugenio Chiaradia, called “The Professor”. Its main features are the Strong Club, punitive double even at one-level – we don’t use the Sputnik Double – and the Preparedness Principle, that is to open prepared to rebid over any response, careless of the suit lengths (note: the Preparedness Principle is played by the Manchester’s Twins Jason and Justin Hackett as well).

The other pair of the Staff is made by Catherine Gerrard and Laura Cecilia Porro, an Italian living in Scotland to get the doctorate at St. Andrew University; thus we are having a future Doctor as well. Laura and Catherine are playing in April in the female Scotland Team for the Lady Milne, another trophy of the Camrose Series. Their system is a 4CM Acol Style with Weak Notrump and 2/1 response not game forcing, which just promises rebid within 2NT. An interesting feature of Laura and Catherine’s system are the slam inviting 5♠/♥openings, made with those hands very strong and by a suit very long but leaky; the Responder will bid the slam according with his trump honours.

We have asked Catherine Gerrard to send information about herself; she courtesy replied:

I am a retired Speech Therapist, but left the profession some time ago to look after my 4 children and 2 step children. When they flew the nest I took up golf which I love.

I believe strongly in Junior bridge as without Juniors we will not have seniors, and I worked for many years with the Scottish Junior squad. Believe too that not enough credit and help is given to those who teach at any level (we need the teachers). Was also involved for many years with the SBU committee but am now sick of the politics 🙂 Played before for Scottish Ladies team (I believe that ladies’ bridge is BAD for ladies’ bridge 🙂 ) WE should all be capable of playing on a level playing field with exception of amateurs and professional.