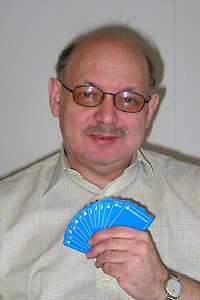 An old bridge-friend, who I have known the last 40 years, has passed away. Originally Roland was a bridge teacher, who earned his money as founder and owner of Bridgecenter Nordsjælland, one of the first professional bridge-schools with clubs here in Denmark. I had the opportunity at that time to play with Roland now and then in the special Danish championships for bridge-clubs, representing his center as an advertisement dressed in “uniform” with his logo. At some time Roland expanded his center, and established collaboration with one or more colleagues/co-owners, and later on Roland sold his part and completely withdrew from the center, in order to use his time on the subject, he is most known for: Director of the exhibition-site on BBO with transmissions from bridge-tournaments all over the world. This has been a tremendous success, witnessed today by the enormous crowds of spectators now visiting BBO during the Covid-19-crisis, and the honor for this goes solely or mainly to Roland for his untiring endeavors through many years.

One last secret about Rolands special skills: he was a highly respected chief judge in the game of cricket, where the rules, as far as I know, is even more complicated than the rules of bridge. Roland will be missed both here in Denmark and several other places around the world.