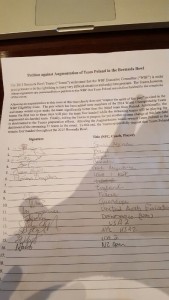 Today a petition against the augmentation of Team Poland in the 2015 Bermuda Bowl has been submitted signed by almost all the teams:

The 2015 Bermuda Bowl Teams (“Teams”) understand that the WBF Executive Committee (“WBF”) is under great pressure to do the right thing in many very difficult situations and under time pressure. The Teams, however,whose signature are conteined below petition to the WBF that Team Poland remain four handed for the remainder of the event.

Allowing an augmentation to this team at this time clearly  does not “respect the spirit of fair play as cited in the WBF Eligibility Code. The pair which has been added were members of the 2014 World Championship Team and many would argue make the team significantly better than the initial team from Poland. Additionally, the teams the first two to three days will play the team four handed while the remaining teams will be playing the argumented six-handed team. Finally, asking the Teams to prepare for yet another system change at this late date is detrimental to the Teams preparation efforts. Allowign the Augmentation would reward Team Poland to the detriment of the remaining 21 teams in the event. To this end, the Teams respectfully request that Team Poland remain four handed throughout the 25 Bermuda Bowl.