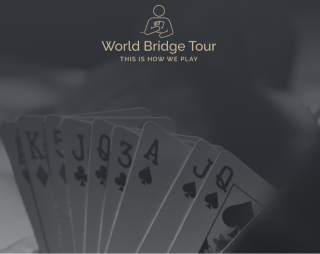 Due to the pandemic restrictions, all live bridge events have been canceled. As result, several organisations were created to run online events. In this article we introduce you the World Bridge Tour (WBT)

“Being a partnership game and based on concealed information, bridge is a fragile game. Unless it is played by integrity, the game won’t be fair. History has shown that quite a few players, unfortunately, have been willing to break and/or bend the rules in order to gain an edge.

When bridge moved from physical tables to virtual tables in March 2020 (due to the Covid-19 pandemic), it soon became clear that cheating had a sad impact on the online game. With the bridge organizations putting themselves on the sidelines, it was up to the tournament organizers and players to solve the rampant cheating problem.

Boye Brogeland, who was instrumental in exposing the 2015 Bridge cheating scandal, became involved with combatting online bridge cheating in June 2020. He became part of the Credentials Advisory Team (CAT), which recommended who could play in ALT and OCBL events. As in 2015, Brogeland had great help from Thomas Charlsen in analysing bridge hands of suspected players.

Charlsen had the idea of making an umbrella organization which could licence players for online bridge tournaments. Organizers like ALT and OCBL seemed very interested in receiving similar help as they had asked CAT for by the summer of 2020. This lead to World Bridge Holding AS (WBH) being established in October 2020, with the launch of the World Bridge Tour in January 2021.” (World Bridge Tour)

Updated 27/12/2020. ALT left WBT. Boye Brogeland stated: “We had hoped to include also the popular ALT tournaments in the World Bridge Tour, but our agreement fell through in the last minute due to different principles regarding who would be eligible to play. The tournament calendar on our website will soon be updated to reflect this.” (BridgeWinners December 26, 2020).