The National Sports Judge (solicitor Tommaso Toniolo)’s verdict about the lawsuit against Fulvio Fantoni and Claudio Nunes has been published today.

Fantoni and Nunes were charged because of “an abnormal play, which raised doubts whether players received UI about the deal”, during the finals of the Italian Open Teams Championships’ Premier League (Salsomaggiore Terme, May 2015). 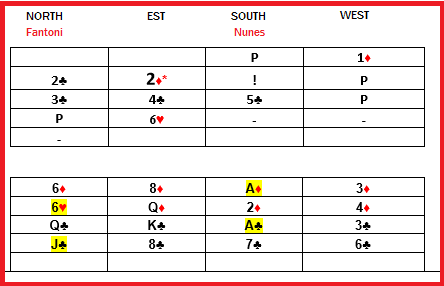 The Judge’s and Defence’s consultants mostly agree that the Ace of Diamonds lead makes sense from a technical point of view and that Nunes was a priori right to assume declarer was void in clubs (hence he did not double).

“It is however difficult to justify the very risky diamond continuation, given dummy’s shape after the screen was opened: the defender should have easily realised that Fantoni could not have had 8 clubs (given that dummy had a doubleton and that Fantoni did not preempt). This means that the Ace of Clubs was cashing, thus defeating the contract. Nunes could have tried to give Fantoni a ruff later on.”

To justify his actions, Nunes claims to “have had a moment of mental blackout, which made it impossible for him to think. He mechanically played another diamond, because he was convinced declarer had a club void”.

The vugraph operator states that Nunes took around 10 seconds to choose the lead (with the screen closed) and only two seconds after that to continue with a diamond.

The Defence’s consultants (“some spontaneously, others…repeating”) fully support this defensive line. The Judge’s consultants are more skeptic: Totaro thinks the blackout is possible, whilst De Falco does not find it plausible and leaves the Judge to make his own mind up on the player’s mental state.

The Public Prosecutor’s Office “points out not only that the play was abnormal, but also that Fantoni, when he realised Nunes had the Ace of Clubs, reacted in a way that seemed artificial and insincere”

After agreeing that Nunes’ defence is not standard, the Judge has to decide whether Nunes’ justification is credible, or whether there are enough proofs to show that UI was received.

The Judge briefly digresses to explain the norms around how to prove someone guilty and warranties for the parties.

To protect the accused parties, the Judge states to have quickly surveyed the matter, “verifying that behaviours such as the one described by Nunes are indeed commonly acknowledged in psychology and the relevant literature, where they are referred to as cognitive closures (or difficulties, when less severe)”.

“The logical consequence of these remarks” the Judge concludes “is that there is no proof that UI was received and thus the players are acquitted”.

The full text of the verdict in Italian is available on the Italian Federation website: click  here »

The Public Attorney’s Office or the parties may appeal against the Sports Judge’s verdict. The appeal has to be filed within 5 days of the verdict’s publication.