Allegra team from Turin (Lavazza) won for the fourth time in a row the Italian Clubs Teams Championships. I called Norberto to congratulate him and I did not miss a chance to have a chat about the Italian’s extraordinary performance in Bali.

Norberto, as soon as you came back from Bali you went to Salsomaggiore (Parma, Italy) to play the team championships: did you find a joyful atmosphere?

Certainly yes. All players in Salsomaggiore congratulated us and were very impressed by our clear victory. All said they were amazed by the technical quality of our bridge. I have to say that these compliments came from many players, including our foreign friends. I was very pleased to receive, for instance, an enthusiastic message from Dutch champions Brink and Drjver, about our incredible performance.

Indeed, what I heard from everybody, fans and players, is that Italy demonstrated an amazing technique. Can you explain me why the Italian team is technically superior to others?

The strength of this team lies in the concurrence of positive factors, which we already had inside us, but we did not manage to express until now. What prevented us from playing at our best was the slightly conflicting atmosphere between the players, and we were struggling to deliver good results. This year we reached the World Championships with a different attitude, we talked a lot within the team and within the individual partnerships. We acknowledged that in order to win we needed to make a joint psychological effort, putting aside our idiosyncrasies and issues, and working for the team all together. Basically, if we wanted to win we needed to play as a team and be rigorous. And so it happened.

Can we analyse what are the winning features of this team?

There are many factors that contributed to victory. First of all, the team members are all good players. Secondly, we are all professionals who study and train constantly. Furthermore, we have solid partnerships: Lauria and Versace have been playing together for twenty years, and also Duboin-Sementa and Bocchi-Madala are now consolidated partnerships. Another feature that gives Italy the winning edge is knowing how to match modern and aggressive bridge with a classic style. Each partnership has different characteristics, but together they are a winning mix. With a metaphor from football we could say that Alfredo and Lorenzo are our mid fields, Agustin and I are strikers, Giorgino and Antonio are defenders. As you can see, we have a balanced and well-organised team.

Can you explain this metaphor better? Why are Lauria and Versace midfields?

Lauria and Versace are two bulldozers, very solid players who guarantee plus scores, they are stable. In this last year Lauria has adopted a more modern and aggressive bridge. This pair is a warranty: when you play and they are in the other room, you feel safe because you know they will not make a mess. This is a great advantage especially for Agustin and me who play a risky system.

Agustin and you are strikers: what does this mean?

We generate swings on many boards, this can make us lose or win many points. Basically we play very aggressively and this involves some risk.

What are the technical elements that make your bridge aggressive?

The basic concept is the distinction between being vulnerable or not. We play two different systems depending on the vulnerability. When red we play a conservative bridge, nearly “normal”. When green we transform,  like Dr Jakyll and Mr Hyde: the openings are different, and so are the bidding sequences, conventions, and overcalls.

Can you show me one example of this difference between green and red?

The 2 spade opener is very aggressive when non-vulnerable: it shows a two-suited hand 5-4 in the minors, and we force opponents to bid at the three level. When we are vulnerable we play it as a normal weak opener. When we are vulnerable we mostly try to show our hands, using a traditional or old-style bidding. When green we turn into warriors. Another example: we have three different types of 1NT opening bids. When green against red, 1NT is 10-13, at love all we open 12-14, and when vulnerable we open 15-17. The whole mechanism of the system, from the basic openings to the more complex sequences, is based on the vulnerability. We work hard on the system, our partnership is based on an accurate and complex system, called “Big Bang”,which we developed. But when we are not sure about something we also ask Lauria.

What does Lorenzo think of your system, called “Big Bang”?

I think that bridge in the future will acknowledge more the importance of the difference between green and red. When I was talking about it with Lorenzo, until a couple of years ago, even he would not believe it. Now he is nearly convinced that this bridge can have the winning edge. I like to think that our bridge is a pioneer: Italians have always been avant guard and I strongly believe in this new way of thinking about bridge. To be honest, other pairs play differently depending on vulnerability as well, but they do it in a simplistic way, whereas we work on it meticulously. 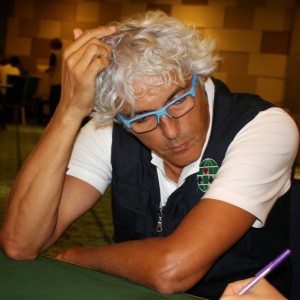 Your system is sophisticated, complex and always changing: have you ever forgotten a sequence?

Let me use a strong metaphor, which should give you the right idea. The system is like a weapon. Imagine the difference between a knife and a sophisticated gun. In the second case you could make a slaughter, but the gun could also get jammed and this would be a problem. If you hold a knife, it cannot get jammed but you have less damage potential. Forgetting is a risk, but it is a part of the game. If you forget the system once, you score a bottom, but in the long run you benefit from it. This year in Bali we were really focused and we forgot very little.

Let us go back to the metaphor, you called Duboin and Sementa the defenders, why?

Even though Sementa is a naturally creative player, their style is solid, their strategy is to make as few mistakes as possible and wait for opponents’ mistakes. This type of “waiting” bridge can bring in many points.

When did you feel that you were going to win the Bermuda Bowl?

During the whole Championships we were calm and were feeling in great shape: however, the stress levels are very high and you cannot be sure until the end. For instance, against Poland in the semifinal we were quite worried: against the Netherlands they played very well and proved to be very solid, so I have to say we were scared. But in the end we beat them by a lot.

Were you worried before the final against Monaco?

We were not that worried about Monaco: Agustin and I have a lucky winning record against Monaco players, so we were calm. I would have been more worried to play against USA1, because they play an aggressive bridge, nearly gambling.

In Bali the Italian team had a new coach (Giuseppe Failla) and a new captain (Gianni Medugno): how much did you miss madam Lavazza?

Failla and Medugno accompanied the national team for the first time and really wanted to do well, they were close to us and supported us. In particular Gianni was very excited.I agree with what Alfredo Versace says about Maria Teresa Lavazza in the interview he gave you a couple of days ago: this victory belongs to her because this is the team she wanted and created. Behind the players are the sponsors, who give us the opportunity to play, study and reach the big competitions in the best frame of mind. Maria Teresa is a great captain and taught us a lot: if today we know how to behave in the national team, we owe it to her.

They say that one should not change a winning team. However, for the next European Championships the Italian federation has already announced that there will be trials. Bocchi-Madala and Lauria-Versace play for different sponsors (Lavazza and Angelini, respectively): what is going to happen?

The strongest Italian players play for different sponsors, so I am afraid that Italy will not be able to line up a strong enough team to win the World Championships, and even qualifying for it will be hard. Trials do not always select the strongest team, and we may end up outside the top 8 in Europe. I can imagine that my answer may sound harsd, but I always speak frankly and the scenario is not promising: I wonder how it is possible to qualify for the World Championships without at least two world class pairs. I believe that if Bali’s team will be broken up, as it seems likely, the chances of winning will drop drastically.

Don’t you think that after this victory the Italian federation may reconsider its decision about trials?

No, because trials were a crucial point of the election programme of Medugno and I think the new president should fulfil the promises made during the electoral campaign.

To bring this interview to a close, Norberto what are your forthcoming commitments?

I will play the City of Rome – Angelini tournament, then Cavendish in Monaco, the Champions’ Cup in Opatija and the US National in Phoenix. Two months of hard work!

One Reply to “Norberto Bocchi: The Big Bang Theory (interview)”