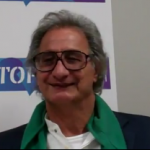 The news was announced recently that Lew Stansby and Chip Martel have broken up their long-standing partnership. Together, the pair have won three Bermuda Bowls, a Rosenblum and a World Open Pairs and thus are among only a handful of players to have won three of the four Grand Slam titles. They need an Olympiad Team title to complete the career Grand Slam. Additionally, Stansby has won two World Senior Teams titles.

It has been reported that Stansby will partner Bart Bramley, which whom he won one of the Senior titles, and that Martel will join forces with Zia Mahmood on the Fleisher team.

Bobby Levin-Steve Weinstein have left the Fleisher team to join Nickell, immediately re-establishing them as the team to beat in the USA.

Bob Hamman, formerly of the Nickell team, will partner Justin Lall on a team with Joel Wooldridge-John Hurd (all three of them on the 2nd–place Bermuda Bowl team in Veldhoven) and Bob and Shane Blanchard (père et fils).