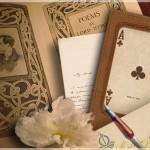 In the last number of Bridge World (March 2012), there is the Marshall Miles’s article “Picture Bids and Delayed Raise”. The Picture Bid (also called Slow Arrival), is a delayed jump to show specific values in a suit. This concept is the opposite of the Fast Arrival Principle; to explain the difference, let’s see the following example: be the auction 1♠-2♣; 2♠-4♠ in a 2/1 gf System. If the pair’s style is the Fast Arrival, by 2♣… 4♠ sequence the Responder has shown the minimum strength of his 2♣ response; for example with this hand:

If the pair uses the Picture Bid style instead, the same auction is a slam invite with specific strength in clubs, like the following:

The article of Miles deals with different ways to combine the first forcing response with a delayed jump – the Picture Bidding – in order to make a more accurate portrait of the Responder’s hand.

He shows the following examples, between the others (“MM” stays for Marshall Miles’ example):

The Responder’s sequence well describes the strength in the named suit and the lack of control in the unnamed club and heart. Let’s note that, in non-game forcing 2/1 response systems, after 1♠-2♦; 2♠… the simple 3♠ raise is not forcing.

Miles presents other examples, for our purposes these two are enough. What he demonstrates is that the Picture Bid not only shows the strength, but also points towards where exactly lies that strength. In this way, it becomes easier to locate the controls, and the side suits that supply the tricks that need for those slam called with less than the canonical thirty-three points.

Good ideas, but not entirely new. All the matter had already been studied by Eugenio Chiaradia in the early Sixties of the past century, and solved by his “Neapolitan Club 4♣-4♦ Convention”.

In the non game-forcing 2/1 systems, i.e. all the systems played before the Seventies, the Responder has the problem to not be dropped after a support at level three. To say it in other terms, the Responder has a reverse hand, but is hampered to show his strength because his suit coincides with the opening one and the Opener repeats it (as spades in MM1), or coincides with the second suit of the Opener (as hearts in MM2), so the raise at level three becomes only inviting.

In 1961’s edition of his Neapolitan Club, Chiaradia published the embryo of his idea: the “Neapolitan Club 4♦ Convention”. Five years later, in 1966’s edition, he presented the complete solution of the problem. The syntax of the Convention is as follows (examples):

North has heart support and control in both minors. His best suit is diamond (first called). The control is usually by king or ace, but sometimes could be by singleton or void. The suit first called, diamond in this case, is normally a real suit.

Spade support; both minor controls; the best suit is club.

North has spade support, then he can reverse directly by jump. The Convention here doesn’t apply, and the controls will be given by normal cue bids. In the “d” example it must be noted that North knew the trump suit since the opening, then he was prepared to jump already since the first response; hence his 2♦ already shows the control. He does not deny the club control, but, if it exists, the best suit is diamond.

Until now, a distract reader could think that the Neapolitan Club 4♣-4♦ Convention were essential in non-forcing 2/1 response – as it is – but only sometimes useful when the 2/1 response is already game forcing. Not only Miles demonstrates the opposite, but the Convention also applies after the response at level one. Example:

3♣ and 3♥: natural inviting raise in the named suit

4♦: hearth reverse, following the general rule but with a difference: it is not longer granted the diamond control, as there is only one bid available for the forcing support.

Forced: a convention that ensues the Basic one. Example: short diamond to show club in Strong Club systems.

Treatment: the treatment is a partly conventional bid. It shows the named suit and bear other meanings that aren’t in the natural bidding. Example: 2♥ (or 2♠) opening to show a two suiter with the named major.

In the last example (e) it must be underlined as all the bids were natural and descriptive; the only conventional is 4♦, a “free convention”, that is a convention which would be anyway meaningless as natural. This is constant feature of the Neapolitan Club; it is a natural system where the conventions are introduced in nobody land – the free conventions – or where the natural development would become misleading, but ever trying to use treatments more than basic conventions.

Marshall Miles’ suggestions not only have the same bidding structure and purposes of Neapolitan Club 4♣-4♦ Convention, but also share with Chiaradia the aim to avoid basic conventions and to use treatments instead.