128 teams were split into 16 groups of 8 teams based on the masterpoint averages, and teams played a single round robin in each group. Top four of each group (total of 64 teams) qualified for the Knockout Stage of the championship. Each match is 3 sets of 16 boards in this stage except the final game which is 4 sets of 16 boards. 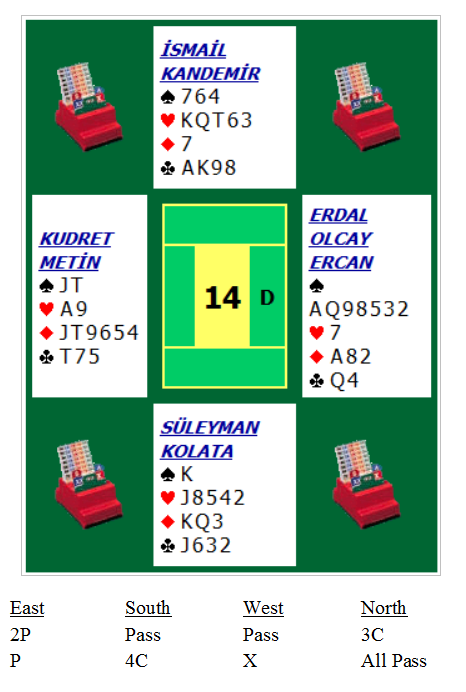 East led A of spades and continued with Q of spades. Declarer ruffed from dummy and played a heart won by A of West. West played 7 of clubs, declarer chose A of clubs and continued with a heart and a diamond, making 4H x =. This was 5 IMPs against 4H = in the other room.

Major – Yilankiran Final started immediately after the last set of Semi-Final matches (on Friday) and the first set had lots of interesting hands.

Here is an interesting deal from the first set: 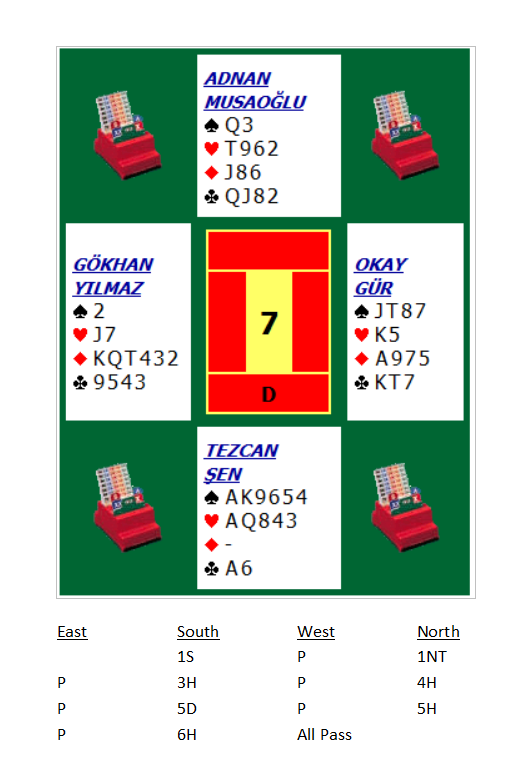 In the original hand, board was not placed correctly (or the hand diagram is wrong), so Musaoglu opened 1S and reached 6H by himself after discovering the heart fit. Declarer won the spade lead by dummy, played Ace of hearts and a heart, and claimed. In the other table, South used Gazzilli 2C, but when West overcalled 2D and East responded 2NT, he chose to bid 4H. Major won 13 IMPs and took a huge momentum after this board. 4 big and 5 small swings gave them a big lead for a final match, 84-9.

Here is the standings after final match and third place playoff:

Ovunc Yilmaz was born and grew in Aydin, Turkey. In 2005, he moved to Istanbul to attend Koc University and started playing bridge. He played for Turkish Schools and Juniors teams between 2007-2010. In 2010, he moved to US to pursue his PhD and started to captain the college team in the University of North Carolina and he won 2012 North American Collegiate Championships. He is an ACBL-accredited bridge teacher and teaches the students in his university. Top level bridge (especially kibitzing) is his passion and you can see him watching top pairs (mostly Italians) at NABCs.