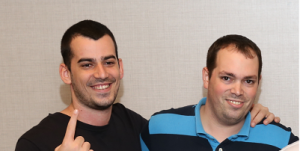 Fisher & Schwartz hired an international legal and professional team which will unveil the persons and interests behind the attempt to implicate them with false accusations.

In recent days, following a series of impressive and unusual professional success, Mr. Lotan Fisher and Mr. Ron Schwartz, both prominent Bridge champions, have found themselves in the middle of a false and harsh smear campaign, which is orchestrated by several of their rivals in the competitive Bridge field.

Other than several clips which were published online, both Fisher and Schwartz have no knowledge of the nature of the accusations and are both determined to prove their innocence.

Fisher and Schwartz have announced today (Monday) that for the time being and in order to prevent any shadow over their successes, they will not compete as a pair. However the couple wishes to reaffirm that they will both continue to play bridge as teammates both in official and private tournaments.

To facilitate that, Fisher and Schwartz have hired Adv. Dror Arad Ayalon, former chairman of Israel’s bar association’s ethics committee to lead an international legal and professional team – which will disprove any false accusations, and in addition will disclose the persons and interests behind the heinous attempt to implicate them.

As to the accusation made by Mr. Brogeland – the Fisher-Schwartz legal team responded as follows:
Mr. Brogeland’s accusations are not only paranoid and false, but are also a crude attempt to spin the facts. Despite the great damage Mr. Brogeland inflicted not only to the good names of Mr. Schwartz and Fisher, but also to their livelihood and careers, he now attempts to portray himself as the “innocent victim”. The truth is that the only thing Mr. Brogeland has to fear about – is the legal and professional consequences of his actions, in which the first step will be an imminent law suit.